I'm indebted to Sarah Kirkconnell for her video about trail baking. This aspect of outdoor cuisine is very much a North American thing but like all good backpacking ideas, cosy use and Bush Buddies to name a few, UK backpackers are slowly beginning to dabble with trail baking. You only have to listen to Podcast Bob's Cape Wrath Trail ditty on bannock to realise what we've been missing.

Sarah's neat trick was to use a silicon muffin case that has legs. Designed for fun in mind the legs have an interesting other use. In a cook pot the muffin case, it's feet in water, becomes a mini Bain Marie. 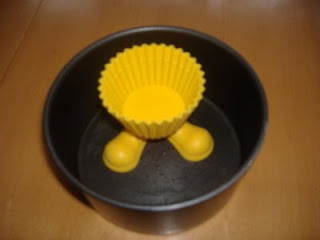 Muffin case in an AGG 3 cup pan
Ingenious! The muffin case is very heat resistant, lightweight and non stick, a very simple alternative to proprietary steam bake devices available across the pond. The only downside was that I was having trouble finding a UK supplier, until the weekend when I found a shop just off Chiswick High Street that sells them - details here. (NB only currently available in store or by email/telephone order.) 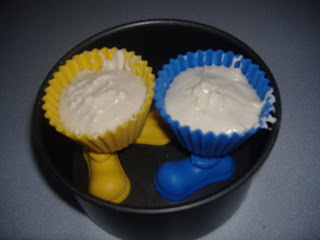 Muffin cases with mix before cooking
First up was a simple mix of flour, oil and water. I used 30g of Doves Farm gluten free self raising flour, 15ml of oil and added enough water to make a fairly stiff-ish batter. The batter was spooned into the muffin cases and their feet covered with boiling water. The pan was set on a very low heat and covered. Sarah recommends a cooking time of approx 15 minutes. 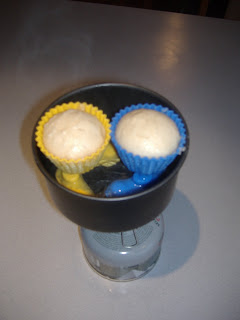 The muffin breads turned out to be quite palatable (despite the colour and lack of flavourings). They reminded me of mini steam puds so I immediately thought of adding chopped dates to make spotted dick or pouring some golden syrup in the bottom of the case before adding the batter to make a syrup pudding (obviously!) Of course they could be given a savory flavour by adding sun dried tomatoes or olives, rosemary and garlic.

One thing that I didn't test was how much fuel was used in the process, something I'll look at when I start to experiment with different flour mixes, and flavour combinations.

Email ThisBlogThis!Share to TwitterShare to FacebookShare to Pinterest
Labels: Food

I did another segment this week :-)

I read that last week. Coincidentially I was experimenting with chocolate too. Made some mini muffins for my son but forgot to put sugar in them. Needless to state he wasnt that impressed!