This was to be our attempt to complete the North Downs Way before Darren headed off up north. Midweek he suddenly realised that all those stoves that he's been buying along with a mountain of other kit, games consoles, DVD's and the alike needed safely packing in tea chests for his impending move. So he cried off opting shoot videos instead.

Getting to Oxted was an easy matter of catching a train into Clapham Junction and out again. From Oxted we picked up the unsigned Greensand Way to Oxted Downs about a mile or so before where we finished a few weeks previous. (The idea of catching a cab to Botley Hill was poo-pooed - a decision which would later turn around and bite us on the heals.) 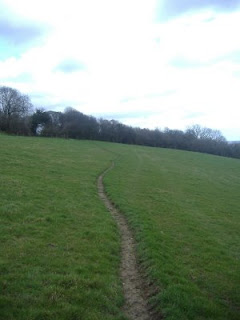 The first thing that we noticed as we progressed along this section was that the change in the countryside, as we moved into Kent it became much more rural. From Titsey Place the path runs along the top of the chalk escarpment like the earlier sections such as between St Martha's Hill and Box Hill. 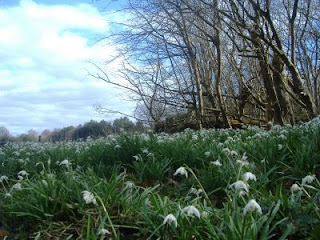 The motorway becomes less and less intrusive until you have to drop down to cross it at Morants Court Farm, when the path becomes sandwiched between a busy A road and the M25. Although this was at the tail end of our day it didn't spoil the preceding time on the trail. And unlike the previous section you manage to escape it as you head east. 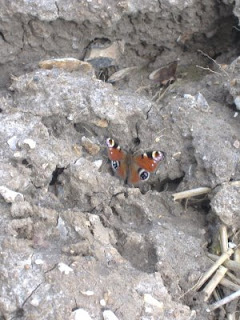 At Otford we stopped for refreshments and quick review of our plan. We hadn't gotten far enough along the way as we wanted to, mostly because I'd had a series of blood sugar crashes that kept slowing us down. Our chosen camping spot was still a couple hours off and I was struggling to keep going. A quick visit to the station settled it and we were on a train back to London.

Glad you enjoyed this bit better than the last. I liked your picture of the snowdrops. Was it muddy? I did this section in the autumn - to be recommended as the colours are lovely...

Nothing like blood sugar crashes to slow you down. How far in kms (or miles) was your walk?

It wasn't as muddy as it could have been!

I started the day with a sub 6mmol fasting blood sugar. To compound the problem I hadn't adjusted my basal dosage the night before, so with walking hour on hour I kept dipping down.

I enjoyed reading about your walk over the many postings. Keep going as it is an enjoyable read and looks a good walk.

The last installment wont be until mid May now because of other commitments. Luckily some of those involve weekends away backapacking.