I used Grough Route to plot the route we'll be taking. I've not used mapping software before so cant comment on how it compares with other systems but I found it fairly straightforward to use once I'd got the hang of it. One thing I'd change is the wording used to name a route, in the software a route is tagged not named. But that's a minor point and at only £1.50 per month who's to grumble.

The route has been vetted and returned with a few comments as expected. Our route is a simple low level one starting at Shiel Bridge and ending at St Cyrus, so I didn't expect to get much feedback, which was indeed the case.

Training walks are being done, along with a few overnighters to test kit. Kit choice is on going - I've revamped my list at least ten times now, weighed up the pro's and con's of my various cooking systems and shelters, but am still undecided.

Train tickets have been bought and transport to the start sorted thanks to Philip Werner.

Menu planning and dehydrating meals is going ahead. Food parcels will need to be created and shipped.

And my physio says my right knee is looking up to the task but the exercises still need to be done.

The Golite Peak is my bag of choice at the moment. But one of the things that’s a bit irksome is looking for stuff in the big front pocket. It requires a certain amount of rummaging, and possibly some unpacking, to find what I’m looking for.

Handily on either side of the pocket are ice axe retainers that are routed through the pocket. These make a useful points to attach a pair of mini karabiners from which keys and other stuff can be clipped onto. And hence easily located. 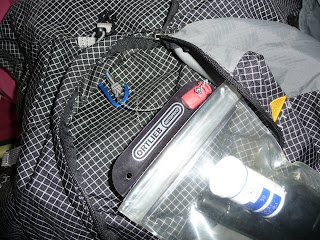 One of the bits of kit that I need to be able to grab without fuss is my blood monitoring machine and insulin. So I’ve made a short toggled lanyard that fits neatly through one of the holes on the Ortleib dry bag that I store the stuff in. A simple loop of dyneema could have been used but I wanted something that wasn’t permanently attached to the dry bag. 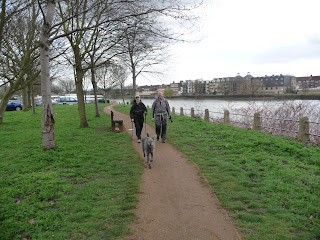 Thames Path, Dukes Meadows
On Mick and Gayle's journey north I'd seen that they were picking up the Thames Path and heading through town before turning north east along the Grand Union Canal at Brentford. As they were going to be in my neck of the woods I offered them a room for the night and join them on their trek.

Putney was thronging with the precursor to next weekend's Oxford and Cambridge boat race. We cleared the crowds as we headed towards Barnes, and took a planned detour at the Wetlands Centre to cut out the Hammersmith leg. Crossing the Thames at Barnes Bridge we were stopped by two guys, Adam and Ben, who were interested in the walk and put their hands in their pockets for a donate to the charity. Nice one guys! Stupid me though; I had a camera handy but failed to take a shot...

Just before Strand on the Green we met up with Juan and Vic, and their tiny three week old baby, Matilda. These are friends of Mick and Gayle who also live locally, and will be providing a place to stay after the next leg of their route. 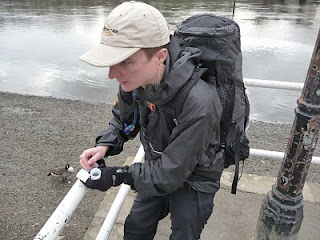 Gayle bagging a cache
Mr Sloman will be pleased to read that this tiny stretch of the Thames has three riverside pubs, at the first Gayle stopped to bag a geocache that I'd pointed out. As we were nearing the end of the days walking and being in W4 clearly we couldn't pass the Bell and Crown without stopping for a pint of Fullers Chiswick Bitter. Unfortunately the weather which had behaved itself most of the day decided to chuck some wet at us. As we'd been sitting outside because we had Harry with us, we quickly said our goodbyes and bundled off to the bus stop for a quick journey back to mine. 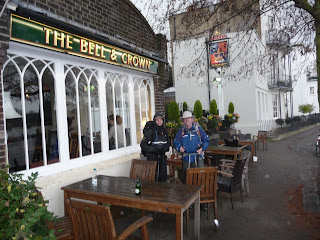 The Bell & Crown, Chiswick
At home Mick pitched Wendy Warmlite in the garden for an airing, and demonstrated the impressive (Penny and I both went, Ahh!) tension banding that made the front hoop rock solid. And I discovered that I can, just, sit up in the front of one of these. Not that I need another tent - honest!

For reasons know only to Mick and Gayle they had skipped lunch, evidently very hungry by now Mick asked when supper would be ready. I said just give me a minute to put the kettle on and offered them a choice of Reiters meals. With the joke over I got cracking on a chick pea and fennel casserole.

With the clocks going forward Mick and Gayle stole an early start the following morning and headed off to Kew for the next leg.
4 comments: