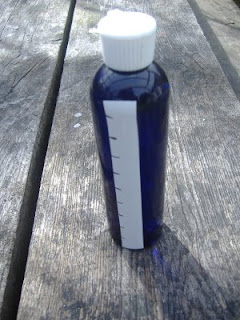 I bought a couple of these when I bought the AGG Pepsi can stove a while ago. The stove comes with a handy measuring cup, which snugly fits inside. Unfortunately the same doesn't apply to the Gnome. Now as the Gnome uses an ounce of fuel to boil a pint of water (notice shift to imperial measurement!) I came up with the following modification as a way of loading the stove with the right amount of meths. I stuck a strip of tape up the side of the bottle and, with it empty, I put an ounce of fuel in at a time marking it as I went. Crude but effective.

Incidentally if you use a clear or white opaque fuel bottle you could follow the same idea but rather than use tape score the side of the bottle instead. You can then use a soft (4B) pencil to make the score stand out as a line by gently shading along the line.

Baz
are you sure that bottle does not leak?
I would reallt test it before putting in your new pack.
andy

Nope it don't leak - I've been using one on and off for a couple of years and no problems.