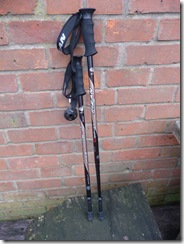 Bought as a present for Penny because she doesn’t own a pair, after she found out that they are really useful when walking in snowy, icy conditions.

It’s claimed that these are the lightest poles in the world according to ultralightoutdoorgear.com from where they were purchased which is blatantly not true. What Fizan claim is that they are the lightest telescopic poles at 158g each. However that weight, which is printed on the poles, isn’t correct either as they tip my postal scales at 20g heavier. Not that this matters to Penny as she isn’t a gram counter, unlike me :)

With those grumbles out of the way I’ll get to the detail. They come in a range of colours of which Penny chose gold, and are supplied with baskets and rubber tip protectors. They are 58cm in their packed size, extending to a max of 131cm. The handles are shaped and have adjustable wrist neoprene loops. And what makes these lighter than other telescopic poles is the patented Flexy Lock System; it requires no external parts. 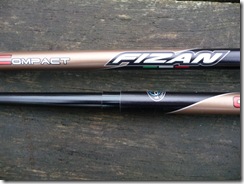 The advantage of telescopic poles is that their height can be adjusted making them suitable for shared use, whoever is using them can fix them to their size. Another advantage is that they nest, unlike the Trail Blaze poles I own, making for a smaller, tidier package. And if you’re a tarp user like myself they give more flexibility to the pitching your shelter. 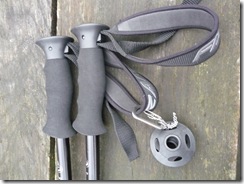 Fly off the handle?

Although they’ve been out on a couple of day walks they languished in the side pocket of Penny’s rucksack. And this may come as some surprise, I’ve not even had a tinker around with a tarp with them yet. That’s for another day and another post.

The 2011 show was held in London for the first time, relocating from Birmingham NEC to ExCel in the docklands. And similar to other events (TFM and the Publishing Expo being another example) this was club sandwiched with the London Bike Show and the London International Boat Show.

The show at it’s previous location wasn’t of any interest to me, not least that I’ve always felt the exhibitors list wanting. And looking at this year list I wasn’t expecting much.

That said I’d been sent some complimentary tickets, Ben was over so it was a good excuse for a trip up to town. And across it, and out the other side; ExCel is the other side of the Isle of Dogs.

It was certainly busy and we wandered around looking at stands but not seeing very much, a friend who had visited the show earlier in the week bemoaned a ‘lack of gear and gadgity things…’ I can only agree.

And on one other stand, someone committed the cardinal sin of not knowing the product they manufacture, even with a laptop connected to their website he wasn’t able to answer my question. I’ll spare them any blushes by not naming them. But suffice to state that if you manufacture freeze dried meals and have a stand at a show like this punters are going ask whether the food contains gluten or any of the other allergens. Not having an answer cost them a customer and any glowing reviews that I might have written.

For my part the small but cosy collection of stands at the BPC AGM is the best place for gear and gadgity things. Now if someone could persuade Henry Shires, Ron Bell and other cottage industry manufacturers to fly over with kitbags of their goodies then that would be, well, brilliant… 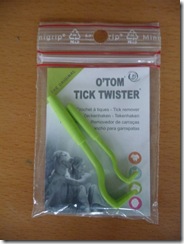 I picked these up at the Outdoor Show from the Lyme Disease Awareness stand for a very worthy five pounds; four the twisters and a pound to the charity for which I received a scratch card. The scratch card rewarded us with another pair of twisters. Ben, my son, picked out his pair in a funky red colour.

These are so light that my scales have had trouble weighing them! I’d guess that they weigh around three or so grams, much lighter and more compact than the pen sized device I’d normally carry.

Simple to use, you just pick the twister to match the size of tick, slot the groove under the tick, and twist!

Prevention is better than a cure so as Seasick Steve sings, wear your socks right up to your knees :) 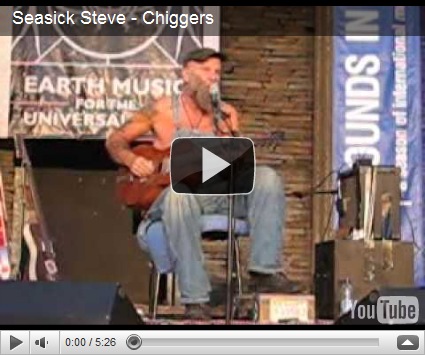 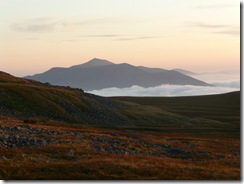 Cloud inversion on the Carneddau

Not really a resolution more of a reaffirmation… I’m going to get out backpacking once a month. No lofty aims or ambitions like bagging Munro’s or Marilyn's, or clocking up 20 mile days, just out in the countryside; some where, any where. In a tent, under a tarp or hanging in a hammock I don’t mind. Just out. In the fresh air, away from the City, in a space to breath, and think, and be free.

And I've not pencilled something in in my diary… no, I’ve written it in biro. 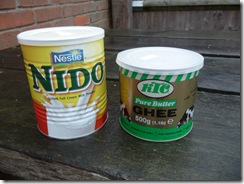 It’s worth doing a browse around ethnic food stores when you get the time as there’s a good chance you may turn up something that could be added to your backpacking pantry.

Most UK supermarkets only seem to stock dried skimmed milk and this watery rubbish, is well, watery tasteless rubbish. So I was pleased to discover Nestle’s Nido full fat dried milk in my local store. As expected the inclusion of the fat makes a big difference to the taste, whilst I’d always prefer fresh milk on my muesli, this stuff is leagues ahead of the watery tasteless stuff that I have been using.

A while ago I spent many hours browsing the web for bannock recipes and as many trying out different flour mixes and combinations to create a decent gluten free bread. Whilst doing this research I came across the idea of using ghee for cooking on the trail, ghee is clarified butter and is used in Indian cooking. The benefits are that it’s solid at ambient temperatures and will keep without refrigeration. Being solid is an advantage over olive oil especially as all the bottles that I’ve ever carried it in seem to leak oil over time. Pity is doesn’t taste the same.