Well the title says it all really. Last morning at work until the 5th January. A few plans to stretch my legs over the break; the delayed next leg of the North Downs Way being one, and a lope over Leith Hill with Andy 'Wild' West being another. I think he's going to find the Surrey Hills a bit tame, that said Winterfold and the surrounding area has it's charms.
1 comment:

Thanks must go to Darren for spotting this.

Mark the mountain guide is written by Mark Seaton a qualified mountain guide, and is an adventure story for kids. Beautifully illustrated throughout the story tells of how Mark and the gang are cut off by an avalanche and how they make their return home from the alpine hut they were staying in.

It's more than a story though. Told in a rather matter of fact way, the book describes the danger but also the precautions and procedures used to negotiate safely in this type of environment. Accompanying the book is a toy karabiner and piece of rope for your audience to practice tying clove hitches and figures of eights. There's an appendix on knot tying, and another on how avalanches are caused and happen.

With the subject matter and technical content in mind, I think that this book would appeal to children in the five to eight year old age range. That's not to state that younger one's won't find the story in itself entertaining.

The acid test of course comes when I read the book to my son once he's opened it for Xmas.

Email ThisBlogThis!Share to TwitterShare to FacebookShare to Pinterest
Labels: books

What to eat and how to cook in the great outdoors is the sub title of this new book from the guide book and outdoor information publisher.

Some of you may be wondering why a diabetic who suffers from coeliac disease is reviewing a cook book but Moveable Feasts is much more than a collection of recipes. It is in fact a comprehensive guide to all aspects to outdoor cookery. It covers everything from nutrition and hydration, through equipment and storage, stock items, wild food foraging, suggested menus and, of course, a selection of recipes.

The bias of the book is very much towards static car based camp cookery with Trangias and gas cylinder cookers prevalent in the the photographs. That's not to state that there isn't anything in here for lightweight backpackers, there's a wealth of information held within the 297 pages. The alphabetic listing of food stuffs with storage, cooking tips and nutritional information is a very useful reference section for those wanting to add variety to their meals or get a new slant on what they currently carry and cook.

If you're new to the outdoors this is a handy reference for all things food. Indeed I would recommend this to any schools that run DoE courses, if only for the fact that I would hope the next party of teenagers that I see cooking on a campsite would be preparing food that I would want to eat, medical conditions allowing of course.

Been off with the dreaded lurgy. Still suffering so have had to postpone the next leg of the North Downs Way that I was planning to walk with Darren tomorrow :(

Andy 'Wild' West is back from the States and there's a well done/welcome home gathering in Ripley tomorrow evening that I'm hoping to be well enough to get to.

The double bag experiment worked last weekend and despite overnight temperatures of (reputedly) -6C I was plenty warm enough.

The Honey and Bush Buddy Ultra stoves were passed around and comments made. The consensus was that the Honey was heavy and the Bush Buddy expensive. No pleasing some backpacking folk.

Here are a few snaps taken at the weekend. 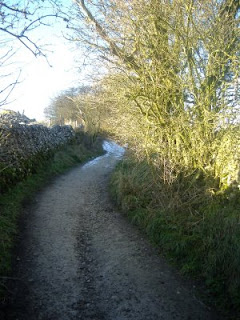 The lane to Hartington. 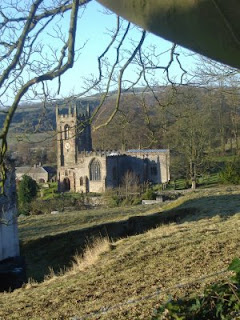 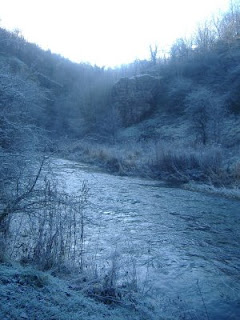 A very frosty Dove Dale.
Hopefully normal service will resume next week with two book reviews. Also on the horizon some feedback on how the Trail Blaze poles work with pitching the GoliteHex 3 and Hut2 tarp tents.

ready for the off

Kit bag packed, batteries charged, food/kitchen box loaded with goodies, all that is left is a visit to the wine shop to buy some liquid entertainment for the weekend.

Weather is still looking clear, bright and sharp. So no snow then which is a pity but when the weather is like this it will help clear the city fumes from my lungs.

I cant wait.
No comments:

I've mentioned in a post below that I'll be up in the peak district at the weekend for the above. I won't be on site until Saturday morning as there's diversion in the journey to collect Christine. I'll keep an eye open for those that I know, and feel free to introduce yourself if I don't.

At the moment the weather is looking clear, crisp and bright. Lovely!
No comments:

I never win anything in raffles and prize draws. That's not strictly true, I did win a huge Easter egg once and at that time eating chocolate was a big no no for diabetics. Mum was happy though, as I gave it to her. And I won a bottle of whiskey in a spot waltz dance competition when I was fourteen. Dad was similarly pleased with his son's two stepping expertise, and the drink.

Fortune was again looking my way on Saturday, on the OBF Bloggers open meet I was lucky enough to win a Honey stove donated by Bob at BPL. And unlike the Easter egg and whiskey I get to keep and play with the stove.

I've not had the time other than put it together a couple of times so my first impressions are limited to just that. There are other blogs out there that cover the ways that the stove can be used, so I won't be replicating what's already been stated or filmed.

A big plus is that the stove packs flat and is, subject to intended usage, modular which means some parts can be left behind if not required. The stove comes with a pouch to keep it all together and, as it's made from fairly thick grade steel, it doesn't need protecting in a pot like the Bush Buddy or Caldera cone needs to be. This strength is one of it's weaknesses, it makes the stove heavy. It's stated weight is 351g or thereabouts which is over double the weight of a Bush Buddy Ultra. I found putting the stove together a bit awkward and wondered how I'd fair with putting it together at the end a long days walk or with cold hands. The edges of the stove components aren't sharp or unfinished in any way but if I had the tools I'd try and polish them a bit as they aren't entirely finger friendly.

I'm going to take the stove off to the Backpackers Club Christmas gathering this weekend for a field test. If the campsite allows I'll try it out as a wood burner and as I'm car camping my trusty Trangia is the stove of choice so I can rig the Honey with the burner and see how they compare.

The Backpackers Club Christmas gathering is this coming weekend and due to a  re-scheduling of my diary I'm now going to be able to go.

This now presents a bit of a dilemma. This time of the year I'd pack my Rab Ladkh 800 for a guaranteed comfy nights sleep. However I'll be doing the gentlemanly thing and letting Penny use it. The Marmot Hydrogen is my bag of choice these days but if the temperature dips below one or two degrees I'll have a miserable night. So my fall back plan will be to take the Mountain Equipment Skyline and double up the bags. This should suffice and if not I can always layer up with a primaloft top if necessary. Now shall I add a bivi bag to the list just in case? Ah the luxury of car camping!