farnham to guildford via the north downs way

"Isn't it about time we walked a different bit of the NDW?" I said.

As much as I like the St Martha's circuit via the Silent Pool and Shere I thought another leg of the way needing walking. I dropped a line to Darren to see if he was up for a stroll, and he was.

The very photogenic llamas looked curiously at us as we passed. One with an eighties style fringe (Mick Hucknell, Simply Red?) struck a pose as both Darren and I snapped away. The only thing that was missing was the cloth cap. 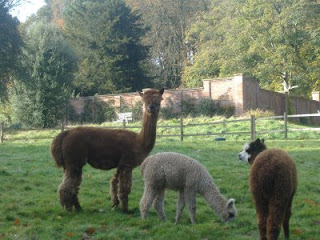 Darren had walked this route a number of times before so I was happy to bimble along chatting as he pointed out which left or right we needed to take. Invariably the conversation gravitated towards gear, and I quizzed him on how to light a Bush Buddy in anticipation of receiving mine.

The pub in Puttenham is walker and dog friendly which was a refreshing change. I can never understand why owners of some pubs that I've been in on National Trails are anti walker. With the number of pubs closing month on month you'd think that they'd be breaking their legs for the custom.

The sunny start to the day petered out as wintry looking clouds headed our way. Luckily we only caught one shower that only lasted a few minutes.

At the Wey navigation we parted company. I was glad that I suggested that he join us on the walk, both Penny and I enjoyed the conversation and the company. He also managed unwittingly to solve my summer long quest for some kind of dehydrated drink flavouring in the form of a couple of Crystal Light sachets that he gave me to try. Top man!

Look out for episode two - to boldly go beyond Newland's Corner.

I just came across your blog and wanted to drop you a note telling you how impressed I was with the information you have posted here. I have a site Guildford http://www.guildfordeye.com so I know what I'm talking about when I say your site is top-notch! Keep up the great work, you are providing a great resource on the Internet here!