Not so much a tarp more a tent without an inner.

It pays dividends to spend time practicing pitching tarps and the Hut2 is no exception. I experimented with different pole configurations finally settling on using a 120cm Hampton pole at the front internally, and a trekking pole at the rear externally. 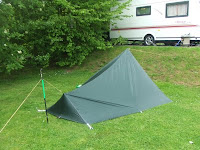 Pitched this way the tarp was quite taunt and gave better use of the narrower, lower tail end. The internal space is roomy and more than enough for two and their kit, with space to cook under shelter if needs be. Tall backpackers can sit up in ease within the tarp as the internal height at the apex is circa 120cm.

The perimeter pitches low to the ground so it's very weathertight and not as drafty as you might think. Using the stuff sack supplied you end up with a pack size roughly the same as a can of beans. On my scales the tarp including stuff sack weighed in at 640g.

One minor quibble with the Hut2 -- it doesn't have a two way zip which would help with ventilation.

There is a report on Backpacking Light where a guy used one of them in Scotland on the WHW. It did him proud. That makes more sense in bad weather than a normal tarp. But add a good bivy bag and you are in Laser Comp weight territory.

I agree with Martin.

I just don't get it. On top of that, you have completely sodden ground after days of rain to lay your bivvy bag down on, plus all the slugs and creepy crawlies.

It all sounds like nice jolly fun when you are in your sitting room watching 'Newsnight' but in reality in the Scottish Highlands in the summer I would suggest that it might be 'prudent'to get a proper tent!

Martin - only thing is I cant sit upright in a laser comp so one of those is next to useless for me.

Alan - days of sodden ground is something that makes all camping miserable. Indeed a tent with an inner would be preferable. As for Scotland midges are a real nuisance so you wont find me north of the boarder in the summer time even with a tent with a bug inner!

You use a OMM Villain pack which is too short a back length for me sadly, so I'm guessing you're shorter?. Try a comp out - or order one like Alan Slomans. Any way have fun.

Funny thing is I measured my sitting height and was sure one would be just fine. However sitting in one in a tent show room was another story. May be if I get a chance to sit in one fully pitched on a campsite it might work.

The headroom in my Wanda (Spephenson's Warmlite 2C) is 104cm at the highest point, so absolutely bags of room. 150cm wide at the front pole, 120cm wide at the rear.

Stronger than an Akto too.

Take a peek on my blog.

I took a look at your blog and it looks impressive - good weight and size. Only down side I can see is that there is no porch, um, let's have a look at their website.

Becasue the tent is cavernous, you really don't need a porch. There is oodles of room and i cook inside the tent (when the weather is foul outside) quite safely.

You do need to adapt your cooking style when cooking indoors, obviously!

There is more in my blog about that too.

I did read aboout your system and can see how that works. I do own a set of legs for my gas stove already too. Um, might have to rethink buying a bush buddy for my birthday!