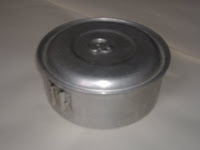 My first cook set was a simple affair; an ex-army hexamine stove, a one pint plastic mug, a two pint pan with lid from a Hiker canteen set and a dessert spoon borrowed from the kitchen drawer. I could boil enough water to make a soup and brew with one to two tablets, depending on the wind. The stove held eight tablets and fitted nicely in the pan. Even by today's standards this was a pretty lightweight solution. In those days soup, cheese rolls and Garibaldi biscuits was the evening meal of choice. With crumbled Weetabix for breakfast.

Then I found the Camping Gaz Globetrotter, this was a mini version of the Bluelet that came with two pots. Despite the stove's ability to simmer my camp cooking prowess still didn't extend beyond making soup, although I did make a concession to buy packets that required more than a 5 minute simmer. The stove when packed in it's pots fitted nicely in an outside pocket of my Karrimor rucksack unlike the solid fuel solution which being much wider and flatter and had to go inside the main compartment. Stability was an issue with this stove so those wide blue folding feet that Camping Gaz made needed to be carried.