I wrote a few words on the problem I had with using one of these here. I contacted Osprey in the UK and have since had a conversation with Tom Entwistle their European Sales Manager about the issue with the bag. Having used one himself with the Exos he stated that he hadn’t experienced any problems with it. Although he could understand the point that I was making about the buckles combined with the width of the straps on the Exos being the problem. He offered to replace the bag without reservation in case the buckles were at fault. And to feed my comments on the problem to the design team.

After the conversation I realised that I hadn’t tried the bag on another rucksack (with wider straps) to test whether is was the buckles, the straps or combination of both. At home I fixed the bottom right buckle on a Berghaus 64zero that has straps that are approx 3mm wider than the Exos. 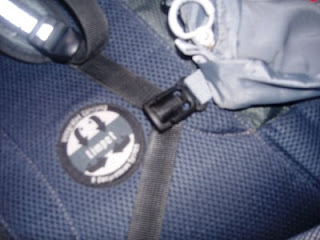 The buckle with some load and the strap clearly not contorting. 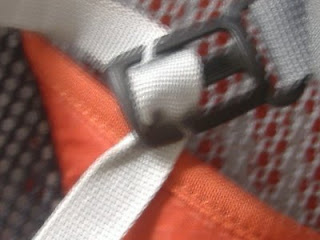 The same again but on the strap on the Exos.

Clearly the positioning of the slots and the width (and possibly thinness of the material) of the straps on the Exos mean that when loaded, that is tightened into place, the straps contort and move into in a position that allows escape, which is in fact what they do. A design fault then which, I believe, can be remedied by using buckles with the slots at the other end to where the strap tightens against.

I’ve written to Osprey to point this out and I hope that they take this on board and sort for future production of the accessory.

Unfortunately for me the buckles aren’t reversible, so I cant pick them apart and re-stitched the other way around. But I have found a simple solution. 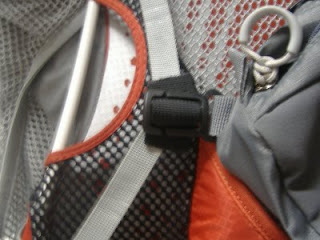 I cut two one inch lengths of wider black strapping and inserted these between the Exos strap and the buckle, this effectively blocks the slots and helps prevent the Exos straps from twisting. It don’t look that tidy but at least I rescued the product from the not to be used ever again box in the attic.

Good lateral thinking to save a bit of gear. Strange that they didn't find the flaw in the design. Osprey are usually pretty thorough.

It's a universal piece of kit so there's a chance that the width of the Exos straps wasnt considered...

This bag caught my eye:- I'm looking at possible methods of carrying a camera in front suspended from the pack. Maybe Osprey will fix that problem soon.
With only 2 fixing points I imagine it would joggle about though.

As a camera bag I found it ideal for me, despite the problems I was having. There are three points of attachment; have a look at the photo in this link http://www.ospreypacks.com/Packs/OspreyAddOns/GrabBag/

You can see two, the other is a strap (that's tucked away) in the far corner near the zip pull. This goes across to the other shoulder strap and has a quick release buckle same as you get with a chest strap. Again the bit that fits the shoulder strap has the slider with the slots. (you can clearly see them in the pic on the link). If the straps you have on your rucksack are wider than that on the Exos you shouldnt have any trouble.