The last few weeks have been consumed by hectic domestic activity so it was something of a relief to find that we had some time to go for a walk. Flicking through Penny's library of Surrey walks we decided to pick a route that tramped around the Devil's Punch Bowl. So I loaded a small day sack with some munchies and two litres of water stuffed Harry, Penny's Lurcher, in the back of the truck and set off for Hindhead. 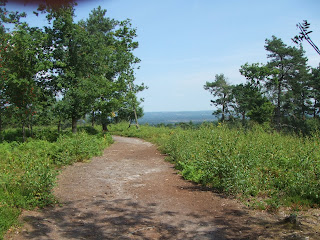 Thankfully the route follows mostly woodland paths so shade was had for much of the six or so miles of the circuit but out on the rim of the bowl by the W A Robertson memorial it felt almost Mediterranean. On the open heathland stretches the path was bordered by bilberries which were in fruit, these are like mini blueberries and we stained our fingers purple picking them.
The outbound path heads north up the west side finally dropping down through a dusty rock strewn gully of a bridleway. A number of the larger blocks showing signs of scrapes where mountain bike bottom brackets had left paint in their passing. (The guide book says take care along this bit in wet weather and it would be difficult terrain if muddy.) From the road the circuit heads east following track and byways to pick up a path that heads south along the east side of the bowl and back to the National trust car park on the A3.

Sandals weren't the most ideal footwear to be wearing on this route as many of the tracks were dusty, gritty or surfaced with golf ball sized aggregate. Nor were they ideal for when the path went through bracken. Harry refused to take point, so we didn't have the luxury of him in front to scare any snakes off, so I was being especially careful where to place my feet. We didn't see any but whilst picking our way through the bracken we disturbed a muntjac deer.

Back at the car park we had a refreshing pot of tea before heading off.