I've been hunting around for a spoon or a fork that's small enough to stash in my Snow Peak 600. I've a folding spork from Alpkit that fits but I've never used because it's the same material as the mug but I'm worried that it will scratch and cause damage. The Light my Fire spork doesn't fit either, and I've even had a stab at modifying one but the handle was too short to be practical.

Roman mentioned the GSI telescopic foon in his kit list for the Via Alpina and my curiosity was piqued so off I went to Google. GSI make all sorts of camping stuff some of which is available here but not the really interesting stuff like this camp cutlery. I bought mine from fellow blogger Sarah Kirkconnell in the States. 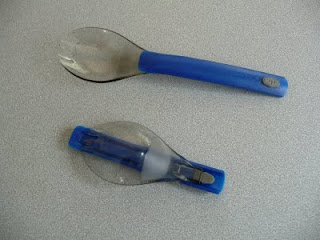 I've used the foon a couple of times now and it works. It slides down neatly to fit in the mug, there's a catch to keep it from collapsing on itself which initially was stiff to use, the handle long enough for use with the 600, and the bowl large enough for a decent mouthful. The prongs handled noodles fairly well too. The only downside that I can foresee is the longevity of the catch and sliding mechanism.

Baz, I use a Tibetan folding spork sometimes but it doesnt seem to cause any issues being stored in the MSR kettle. Having said that the foon looks a nice little bit of kit and one of those natty things that you like to have in the rucksack

I got this thing about using metal on metal hence my search for an alternative.

GSI do a number of natty items like this that you just cant get in the UK.