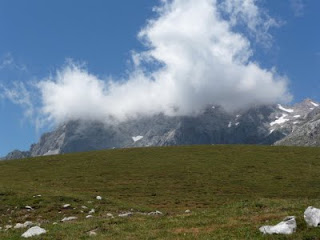 After yesterdays efforts we didn’t hurry our departure from Sotres. I felt fit and unfazed by yesterdays trek, no doubt due to the huge amount of carbohydrate I tucked away the previous evening.The route was straightforward; we were going to take the track through the Valle de Duje, a gorge that runs south to Espinama where there was a possibility of catching a bus to back to Potes or beyond.

The track as far as Vegas del Toro is pretty much usable as a road and part way down was a small parking spot for climbers. The crags weren’t roadside ones, there was a considerable hike up the valley side to the base of the ones mentioned on the information board; like those approaches to crags along the Llanberis Pass but on a much larger scale. Dotted along the valley were meadows where teams of two or more farm workers were using scythes to cut the grass.

We were passed by a number of four by fours heading up to Hotel-Ref Odriozola; this refugio had a bar and bizarrely the passengers, scrubbed up and in their Sunday best, were driving up to take lunch there.

About halfway down the valley there’s a fork in the track below the peak of Prao Cortes. The right hand lead to the hotel the other more directly to our destination. We found a flat spot and had lunch and spotted a couple of vultures feeding on a carcass high on the side of the valley. There were also a number of black birds scavenging on the meadow, I thought they were jackdaws but a closer look revealed that they had red beaks, checking a wildlife book on my return I discovered they were red beaked choughs and close relatives to jackdaws.

We carried on the left hand path, deciding against the detour to the hotel, crossing a wide alpine meadow with grazing sheep, cows and horses. Rock finches flitted amongst the thistles as we approached. 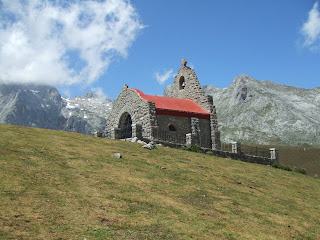 Passing Santluca de Alvia, a seemingly remote church at 1466m, the track starts to improve no doubt to allow access to the church by car. From this point the track begins to decent slowly at first to the Portillas del Boqeron, and then more steeply zig-zagging down though woodland to Espinama. 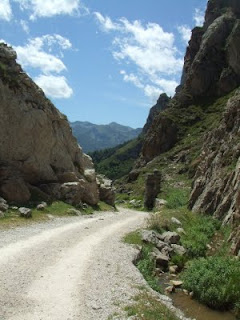 On this last part of the track we met three guys and a handful of kids. Each of them had natty pairs of walking boots, the obligatory walking cane and a little rucksack on each of their backs. It was very refreshing see kids out on a trek, and more impressive were the adults, apart from huge backpacks they were shouldering they also had sacks full of rubbish lashed to their packs. I’ve never seen that level of responsibility to the environment in the UK sadly. One had a tiny frying pan dangling from his pack, I pointed at it and smiled, and he indicated that it was a necessary bit of kit when camping with kids. I nodded an acknowledgement and headed off. Arriving Espinama we grabbed a well deserved cold beer, and found out that we had about an half an hour wait for the bus.

Our trip around the Picos had come to an end and I was reluctant to leave, especially as Espinama has a micro climate similar to the Mediterranean. Sadly on this occasion the bus actually turned up and whisked us away.