I awoke at 4am and watched the rising sun colour the sky; with a full bladder and still being half asleep it didn’t occur to me to find my camera and capture the moment. And when the sun finally struck the silnylon it began to heat up it was time to rise and have breakfast.

Continuing with my ultra lightweight experiment I dropped the usual dish of muesli for breakfast and went for a couple of cereal bars instead. The thinking behind this was that I’d save the weight of fuel used for heating the milk that I’d eat it with, and that of the milk or milk powder that I would be carrying. And there’s no washing up to be done which is an added bonus. Unfortunately I started to run out of steam with in an hour of starting the walk so some refining of this approach is required (read as need to eat three cereal bars!) 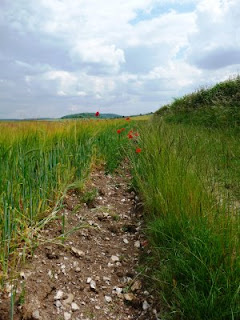 From the campsite we dropped down to Bennett End to pick up Grange Farm Road which we followed until reaching Crowell Wood and despite still being early in the day the shelter of the wood was welcome. Over the other side of Crowell Hill we pulled off the path for a quick breather and the view from the field where we stopped across the Vale of Aylesbury was quite expansive. Dropping down the hill we picked up the Ridgeway Path and followed this north east past the Chinnor chalk pits and onto the Midshires Way at Hempton Wainhill which we followed into Bledlow. 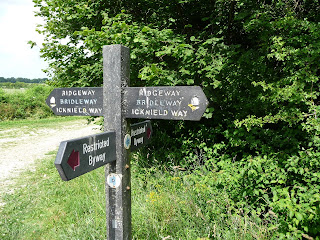 A lunch stop was taken at the Lions of Bledlow where some of the party sampled the small but perfectly kept brews. Back on the Midshires Way we rejoined the Ridgeway at Thickthorne Wood, We crossed wild unkempt meadows on the way up to Lodge Hill where wild strawberries, grasses and orchid grew in abundance, whilst pairs of Marbled Whites, Blue Damsel Fly and Spotted Burnetts (seven spotted, I think) flitted across the hill. Brian and I were very much enthralled by this place and vainly tried to stalk the butterflies with our cameras. At least the orchids kept still! 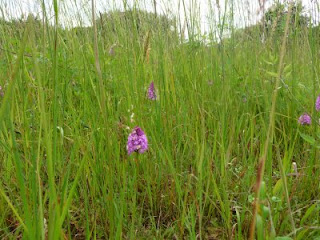 We left the Ridgeway and headed south over the last hill of the day to pick up the Chiltern Way back into Radnage. On the way into the village I spotted an owl on the telegraph wire but fumbling map and camera it flew off before I had a chance to take a snap.

Despite the threat of heavy weather the day passed dry and sunny. It was good to get out and meet up with Chris and Anne, and catch up with Brian and Jill again. And meet a couple of new, to me at any rate, club members.

Did I miss Part1?

Ok, my stupid! Newbie expected part1 and part2 to be next to each other!!!