Bramley Station opened in 1865 as part of the Guildford - Horsham Branch Line. In 1876 a second platform was added and in June 1888 the station changed it's name to Bramley and Wonersh to encompass the nearby village of Wonersh. 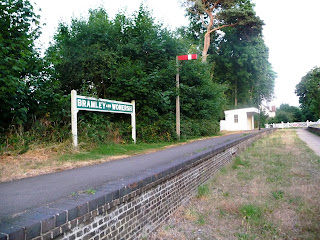 On the 16th December 1942, a German plane dropped a bomb on a train leaving the station, badly damaging the train and killing 7 people, including the driver and the guard.

The Guildford - Horsham line was the only branch line in Surrey to be axed by Dr Beeching in 1965. Shortly after the main station building was demolished and a post box is all that remains.

The line took on new life in the 1980’s as it was redeveloped into the Downs Link, a public footpath and bridleway linking the North and South Downs. There's a series of caches along the line that with a bike to whizz you along between sites would be a grand day out.

In 2004, the local parish council and Bramley Historical Society renovated the station area by reinstating decorative crossing gates and a waiting room on one of the platforms.

That is so spooky - I was there last night on the first leg of doing the Wey South Path. I'm just uploading the pictures now! I shall probably publish my version on Wednesday.

Well I do live in Wonersh at the moment. And having dabbled in geocaching once in a while I popped down to Bramley on Saturday evening to take the dog out for a stroll and grab a cache or two.

Great to know about this....