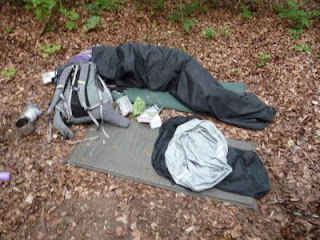 Here's my 'guidance' on how to be stealthy - or not.

Bushcrafters wear green and drab coloured clothing for a reason. Wearing a day glo red synthetic base layer isn't going to help. Unless you happen to be hunkering down in an azalea or rhododendron plantation in April.

Similarly the same goes for your shelter. A Vango Force Ten? Too large profile, and foot print. And even in an azalea or rhododendron plantation in April you'd be hard pressed to hide something that orange. Even a green coloured tarp might be too high a profile; how often do you see green pyramids in the woods when you take your dog for a walk?

Planning on taking a mate? Make sure that s/he isn't a prospective gold medal winner in the 2012 British Olympic Snoring team. Or for that matter, whether you're a similarly aspiring Olympiad.

Using the shelter of the woods is often a ploy of would be stealth campers. However the woods are home to a myriad of munchers that range in size, from the micro sized muncher such as the mosquito, to much larger munchers, badgers or foxes, that have been know to munch rucksacks to get at morsels of food. That said if you're ensconced with one of the above Olympiads chances are that their training will keep the larger munchers away. Sadly micro sized munchers like mosquito's are indiscriminate and will not be deterred by snoring however loud.

So you've found a spot just off the track and someone has helpfully built a lean-to out of rotten branches, and put a black spot on the soil marking the spot where you should light a fire, should you fancy one. Think again, it's probably a trap set by rangers or wardens. Or if not they will certainly know of the place, and so will everyone else.

There is no smoke without fire; avoid being the centre of an arson investigation, leave the stove at home. Whilst wood gas stoves like the Bush Buddy are really efficient, if you can't get really dry wood you'll have a lovely pall of smoke hanging over your camping spot. The equivalent of you putting a poster up on the trail side saying, "I'm in here, on the right, behind the huge thicket." And even if the smoke dissipates some vigilant passer by may get a whiff of it and come and investigate.

Dog walkers do take their dogs out for a walk before seven in the morning.

All good advice, thanks.
One other thing to note: a few years ago I spent a night camping in the King's Forest near Thetford. I picked what I thought was a good spot in a little clearing well away from the obvious forestry tracks, set up my tent and went to sleep.

I awoke to the sound of engines and then, rather terrifyingly, gunshots. I poked my head out of the tent to find lights shining around: two 4x4s were out lamping.

Discretion being the better part of valour, I went back into the tent and buried my head in my clothes.

The lesson: even the quietest spots may not remain quiet throughout the night.

Crikey, I guess it best to park(!) yourself somewhere that's inaccessible to off roaders...

Thanks a ton for this article! Very helpful in my preparation for my first big cycling tour this summer!