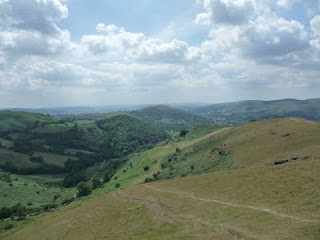 Looking back to Helmeth and Ragleth Hills
In his book the Shropshire Hill Country Vincent Waite says this of Caer Caradoc, "Caer Caradoc is likely to be the first choice of a climber because of its commanding height, bold outline and historical interest." And indeed it was the first of the hills we bagged.

We approached the hill from the east leaving the car at the parking spot under Hope Bowdler Hill. In the Cicerone guide David Hunter's route starts from the car park in Church Stretton but as we drove down from the campsite past this spot it made sense to start from here, especially as there was space. Parking is limited to half a dozen cars but it's free. Unlike the car park in town which is much larger and costs.

What you don't realise if you climb up the eastern slope is how steep and airy the western edge is, it falls dramatically down to the busy A49 and Church Stretton. On our visit there was a lot of haze that so we weren't able to make out much more than the Long Mynd and the Stiperstones. On one of those cold clear days you could see into Wales. But only if it was a still cold day otherwise the only thing you'd make out is the tears streaming out of your eyes, even in the relatively gentle breeze that day my eyes started to well up.

Caer Caradoc is one of the places that Caractacus is said to have made his last stand against the Romans. It's know that the battle took place somewhere in Shropshire but not exactly where, and there are other hills nearby that have the same name. Whether the battle took place here or not it was certainly a settlement because the flat-ish summit is ringed with earthworks. And the imagination is stirred further by the tower-like rock structures that dot the edges of the summit. I could just see these towers, manned by a small bunch of plucky picts throwing rocks, spears and firing arrows at the overwhelming numbers of Roman Legionnaires as they marched up the unremittingly steep slopes. 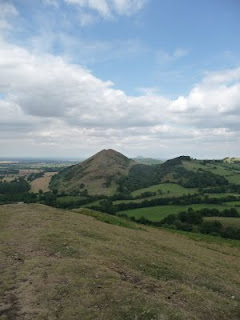 From Little Caradoc, with Lawley and the Wrekin (in the distance)
From the summit of Caer Caradoc we dropped to the lower peak of Little Caradoc before descending further to pick up the track that runs along the eastern edge of the hill, and we followed this back towards the car.