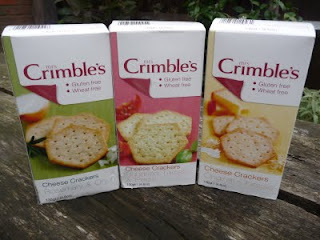 Finding a decent bread substitute for a backpacking lunch is a pain when on a gluten free (GF) diet. Doubly so because I'm a diabetic and need carbohydrate (CHO) to count against the insulin that I inject.

So lucky for me that I was approached by a PR company, The Ideas Network, who's client is Mrs Crimble's, and they sent me three boxes of cheese crackers to try. As it happens at the beginning of this week I was completing the last leg of the South Downs Way, and whilst in the general store in Alfriston I spotted a box of these crackers, so naturally I bought a box.

The three varieties are Original Cheese, Sundried Tomato and Pesto, and Rosemary and Onion, typical Mediterranean flavours then. Nutritionally they all contain 63.8% CHO however the flavoured crackers have few more calories than the plain ones. I like cheese flavoured biscuits because they can be eaten without any spread or topping, and, if you're lucky to have some, they go really well with sliced chorizo or salami.

Each box contains 7 servings of 4 crackers, giving 11.5g CHO per serving, so to suit my need I'd be looking at having a third of a box for lunch when out on the trail.

The crackers are very crisp, and like all gluten free biscuits and crackers they need careful packing because they will break up. Unsurprisingly it's because it's the gluten in wheat and other grains that hold bread, biscuits, etc together. Another point to note is that GF products are usually made from a mix of various starches, and potato starch likes absorbing moisture given any opportunity. Storage in an air tight container is a must, especially as the crackers aren't packed in portions. That said if there were two of you then sharing a box would solve that issue.

The flavouring isn't overpowering like some others I've tried. I'm always wary when food stuff has onion flavouring as usually several hours after eating I can still taste the onion, not so in this case. And I particularly like the crunchy crispness of the crackers.

I'm glad I was offered the opportunity to try these as they will help break up the monopoly that oat cakes have had on my lunch breaks.