I drove to Parcel Force's depot in Mitcham to pay the ransom that they and Customs had levied on the Scarp 1 and collected my belated birthday present (or early Christmas one).

The set up is straightforward; assemble the main pole and feed through the sleeve, locate the ends in the grommets, and with the six supplied pegs, peg out the corners and centre. Adjusting the pitch is equally easy. This is the first tent that I've owned that can be pitched as one and I like the idea.

As hoped I can sit up in the tent and there's plenty of space for one person. Ideal for a venture like the TGO Challenge in fact. It could even be used as a mountain marathon shelter for two as it has two porches. I'm going to have to persuade Penny to try this out on my next test pitch but will hold on to the idea that it was bought as a ONE person tent.

There's enough room in the porch space to park a pair of Terrocs and a rucksack so one could be used for storage the other for cooking, or not at all. If you're worried about cooking under cover then the inner can be pegged back to create more ground space however you'd still have the cross tension band in place. 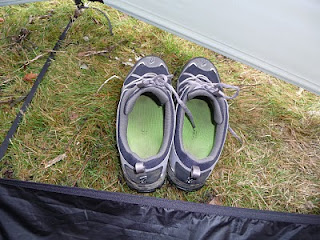 Room for the shoes

Venting options are good; there are short zips at either end, two roof vents and the fly sheet can be gathered up the pole on either side. There's a buckle at the bottom of the zip that can be used to keep the flysheet closed and the zip open for another venting option. The zips on the fly aren't two way however but the buckle can be used to hold the flysheet in place with the zip either fully opened or partially zipped up. The buckle has another use in taking the strain off the zip which is a good thing. The zips on the ends don't have buckles and are prone to parting unfortunately, and there's also an elastic loop that I haven't worked out how to use yet. 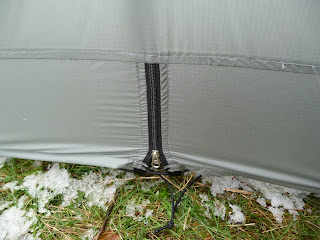 The roof vents are closed by Velcro and an elastic loop and hook. And are kept open by a loop and hook internally. From my first attempt this can be done from inside (once you've had some practice). 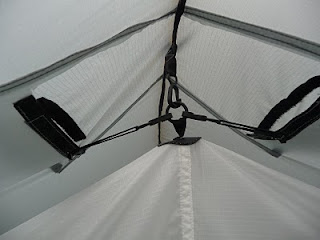 Roof vents from the inside... 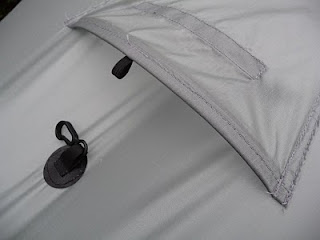 ...and from the outside 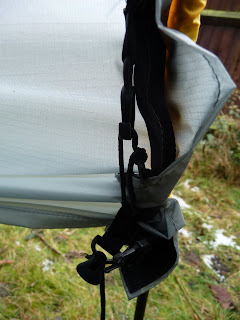 The inner is mostly material with mesh at the apex; it's a long time since I've owned a tent that's like this. Most are where the inner is wholly mesh or in the case the majority of my shelters the inner is wholly non existent. A double zip means that you can adjust venting of the inner on either side. 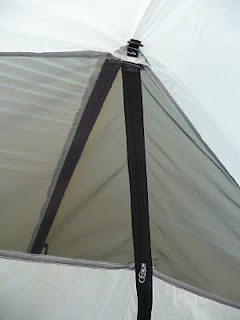 At the top of the zips on the inner is a D ring and at the apex of the inner a clip. All ideal running a drying line or, in case of the clip, hang a lantern from. There is a pocket on either side too. Given the size of the pocket I'm not overly convince of their use; they could take a head torch like a Petzl Tikka but just that. 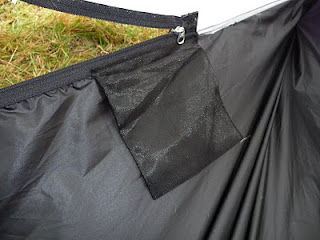 It will hold a cereal bar -just

I've found that there are two patches on Velcro on the under side of the groundsheet, I'll need to drop Henry an email as I'm baffled as to why they are there. 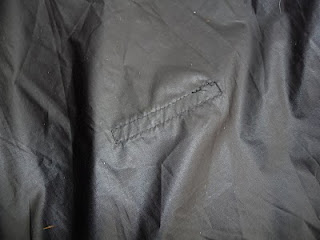 The inner doors can be rolled up and held in place by tying the two lengths of material supplied to do this. I've never found that this is a satisfactory way of keeping a door tied back. I may look to modify this by making a loop and using a friction toggle on the other, that can be feed through the loop to hold the door more securely. That said the simple overhand knot I used stayed put during the time I got in and out of the tent. The doors on the outer have Velcro retainers.

With Christmas and the end of the year fast approaching I'm not sure when I will be able to sneak out for an overnighter to give it a proper try out. Before I do I will be sealing those seams and especially the stitching around the Velcro patches on the groundsheet.

Nice photos and insights, Baz. Good that you got around to play with it and made a post - youtube is holding my video holed up...

How much were you charged by the PO?

Thanks Hendrik, I played with packing it today so will add that to the post when I get out :)

I got stung for 28 quid. I rang Parcel Farce and they told me that I could only collect it once the letter they send is received, luckily that arrived. I ordered some last minute stuff from Amazon that should have arrived on Monday and it turned up this morning!

Alas i couldnt get my Scarp this side of Christmas due to unforseen expenses....

It really does look good and I expct that you will ge out and about in it shortly!

This looks pretty tasty for the Chally.

How much does it weigh without the cross-over poles? Might be worth popping over to the cahllenge message board and letting them know about this post there? There are always people looking for good ideas for a new tent there.

Alan, I know I weighed each piece and thought I'd posted an update to my blog about it but that must have been in a different time-life continuum :)The stated weight on Henry's website is about right, 1328g, or thereabouts.

Nice little tent, just not the best colour for wild camping. Strange, as other manufactures actually can get the green fabric.

At the right angle of view it could blend into a grey sky :)