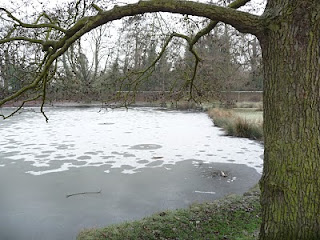 Ham pond
Working from home has it's benefits, I can pretty much stop what I'm doing and head out of the door. As soon as snow started falling I togged up and headed out the door with Harry. 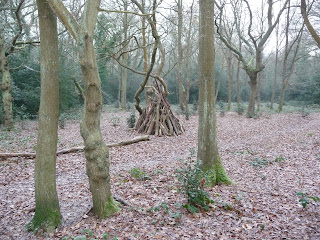 One of the many 'tree houses' found in the park
I've a choice of routes but the one that I favour is a wander through Ham Common Woods to Richmond Park climbing up to Pembroke Lodge for a coffee stop. Pembroke Lodge is a Georgian mansion which was once the home of Bertrand Russell, the view from the terrace is a expansive one and on a good day there are a number of landmarks that can be made out some easier than others (Heathrow airport and Twickenham Stadium). Since I had Harry with me I wasn't allowed in to the house and grounds so had to make do with a coffee from the shack and it being midweek it was quiet. At weekends the car park at Pembroke Lodge is a place where dog walkers, ramblers and sunny day cyclists converge and the Lodge and shack become overwhelmed. 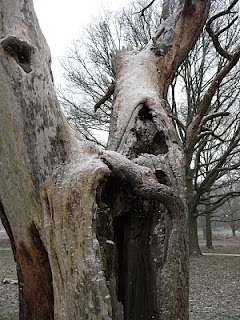 Snow dusting
Just north of the Lodge is a mound, Called King Henry's, where there's a telescope making easier to spot the more elusive landmarks like Windsor Castle. You can also look back to the City along St Paul's Vista. This day however the gap in the trees that create the vista was the only thing I saw. From Richmond Gate there's a path that runs parallel to Star and Garter Hill down to Petersham Gate, I took this and there was now a sprinkling on snow covering the trees and brambles. 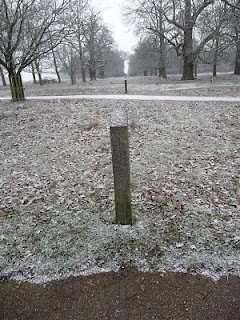 St Paul's Vista
Through the gate and across the road, Richmond council finally installed a crossing here last year, even with the traffic lights at the bottom of the hill getting across this bit of road was a test of skill, timing and nerve. Past Petersham Church, where George Vancover is buried, I left the Capital Ring and followed a series of narrow footpaths skirting walled houses and school playing fields to the Thames.

I've walked and biked this stretch of the river countless times so I poddled along on autopilot with my mind on other things passing Marble Hill House and Ham House without a single glance. At Teddington Lock I picked up the Thames Cycle Path and followed this through to Ham, and home.