I usually have a baseball cap on my kit list for most of the trips, only swapping it out for the classic Lowe Alpine Mountain Cap when the weather is going to be really grim.

The humble baseball cap is the cornerstone of my flexible head gear set up, it keeps the sun, rain and occasional snow flurry out of my eyes. It’s wind resistant but being unlined it’s not that great at keeping my head warm in the colder months nor keeping the wind off my ears.

The second part of the arrangement is a Powerstretch beanie. This add a surprising amount of warmth when worn under the baseball despite its thinness and can be pulled over the ears to provide respite from chilling wind. And at only 28g it’s not going to break the gram bank. It doubles as a nightcap too.

The final part is a buff. I bought a me-too one not an original as I think that twenty odd quid for a tube of material is excessive. Venting the neck area is a great way of cooling down but when it’s chilly it’s nice to have something to plug the gap especially when the collars on some base and mid layers don’t seem to co-ordinate that well. I tend to think of it as a removable polo neck. The flexibility of the tube of material means you can arrange it to cover more of your head ears, and mouth when required, like when you might fancy doing a Lawrence of Arabia impersonation or robbing a bank. And if the wind is particularly strong the buff can be pulled up and over the baseball cap to keep it from flying away. 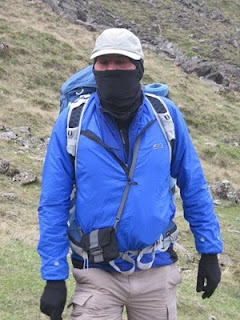 Off to do a bank job?
Upgrades to this system; I'd replace the cheap but still effective buff for a merino wool one, and perhaps use a wind/rain proof cap if you can still buy one.

The photo of the Lawrence look-alike was taken on a recent trip to the Lakes by Adrian Strand.