Not far out of Trevallen the path enters MOD firing range territory which dominates the coast between here and Freshwater West. At St Govan’s Head we made a detour to find the climb that a friend and fellow Marylebone Mountaineering Club member, Marvin, took a fall and lost his life. After a minute of silent remembrance we re-joined the coast path and headed west. Much of the path is military road and is hard going. I’d opted to wear my old faithful Salomons but they were clearly now beyond their useful life as they’d started to make my feet a misery. The wind was beginning to pick up and the open flat limestone cliff tops were an airy place to be. Groups of climbers were seen searching the cliff tops for their chosen climbs and at Huntsman’s Leap we spotted a climber replacing some tat on a climb presumable for a later attempt. 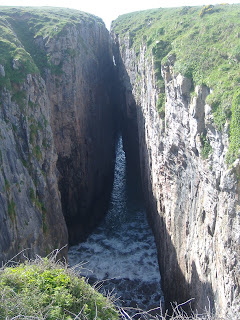 At Buckspool Down we found a sheltered spot and I hobbled to a halt and stopped for a rest. We had a late (second) breakfast or an early elevensies - whatever it was champion. Body and spirit suitably restored we continued on to Stack Rocks. Here the Elegug Stacks were home to nesting razorbills and just before the fence that marks the boundary of the end of the open access MOD land is the Green Bridge, a natural arch that looks like you could walk over it (if you were that way inclined and allowed). 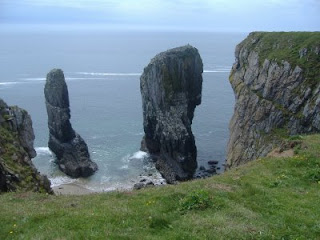 Here the coast path hits an all time low. From the car park the route follows road all the way through to Freshwater West. My advice to anyone who gets to this point is to get the bus! There are no redeeming features or facilities other than a public loo at Castlemartin. It's a completely dispiriting experience of approx six miles perhaps more of tramping along tarmac. The Nat Trails website glosses over this point, so beware. 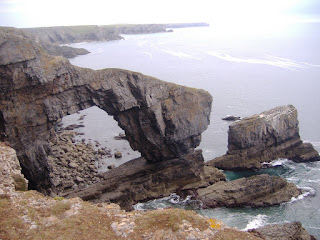 After 3 miles of stomping along we arrived at Castlemartin and found a bus stop, we had about twenty minutes for the next bus through to Angle. Not wishing to spend the next hour pounding along a fairly busy B road we pulled up and decided to catch the bus. Once on the bus the idea of jumping off at Freshwater West was forgotten about and we stayed on until reaching Angle.

This cheeky short cut meant that we got to our destination ahead of time so we hunted out some supplies, got the low down on Newcastle’s relegation and headed off to the pub to enjoy a late lunch/early supper. With the tent pitched Cheryl and Rick, Penny's friends from Tenby, arrived and whisked her off without a complaint back to the pub whilst I lounged and dozed on my NeoAir.

The south Pembrokeshire coast path between Saundersfoot and Stack Rocks was well worth the trip. There's a good bus service that links to rail services at Tenby and Pembroke so it's possible to do this section without a car.

For now I've had my fill of coastal walking. I've got the trip to the Picos in July and the last bit of the North Downs Way that still needs to be completed. So now for something completely different...

Its a beautiful part of the world around Angle and Freshwater West. Me and a large group of friends head off to Angle each August for a long weekend camping and it holds a certain romance for me in an Enid Blyton kind of way!

Many a night spent between the crumbling walls at the disused lifeboat station. The oil refinery gives it a strange beauty at night too.

I suspect you stayed at the site on West Angle Bay? If you want a more 'rustic' experience, try Castle Farm up the road at GR:866 029. Grade A times.

I just realised my profile picture to the right was taken on the beach @ Freshwater West....

We stayed at Castle Farm as the site at West Angle was less inviting.

I'd like to go back to finish the Freshwater West to Angle bit at some point.