My post about the clothes that I was planning to wear/take for my romp through the snow attracted some comment, so I thought that I'd feedback on how my system worked.

I've used the twin base layer approach before in deepest winter and it works surprisingly well better I think than using a single heavier weight layer. The TNF Flight T shirt weighs a miniscule 90g and has a tiny pack size. I was able to walk most of the weekend in this combination as there was some glorious sunshine and hardly any wind. 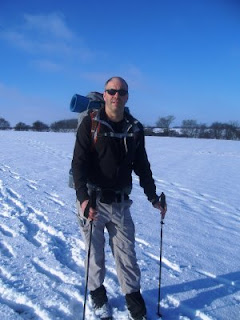 On Sunday morning when there was plenty of cloud cover and a bit of a breeze the TNF Apex shirt came into it's own. It kept off the wind chill and kept in the warmth and when the going got a bit too warm I was able to vent the front without too much difficulty.

The micro fleece was the only item that I didn't wear. My original intention was to use it as an extra layer when walking and as nightwear. However I ended up using it to prevent my water bottle and gas canister from freezing over night.

Hat and gloves went in rotation. The mountain cap was ideal for the cooler parts of the day but I could have done with a power stretch beanie that would have helped prevent my head from chilling at times but this wasn't a major issue. Apart from first thing in the morning or overnight I could have gotten by with just a beanie.

A pair of Extremities windy lite gloves did the trick for most of the trip, with a pair of TNF gauntlet type gloves (a bit of overkill to be honest) being used on Sunday until the sun put in an appearance.

I rarely use thermal leggings but in this case they were welcome. Even when working hard the leggings were always on the right side of comfortable even in the sun. The Red Point jacket was popped on and off at rest stops and kept on in the evenings as you'd expect.

Some useful experienced gained from my selection especially regarding headwear and I'll continue to use the double base layer on chillier days.

I think being able to unzip (or unbutton) a baselayer adds a lot more to its versatility, I wouldn't buy one that I couldn't vent now. Combine that with a windshirt and if it's cold a fleece that are both possible to vent and you have a lot of control.

The important thing then, is to remember to do it! If you are about to go uphill, open a couple of zips. This saves a lot of time and faff changing tops when you don't really need to.

I wore four of my five layers yesterday, (no waterproof) We started midday under high level cloud , into bright sunshine then into cold and windy hill cloud in the dark and I was able to stay comfortable all day.

Baz is spot on...layers work so well. Last year I only got to my full 7 layers on a few occasions.
I got in the habit of taking some layers off and hanging them off my pack in a stuff sack.
This way I could continue walking whilst undressing. Surely I could make good money out of that skill?

Anything to get the miles in!

Hi Baz
After all that, your layers look very similar to what we used in the dry -30C conditions in Canada.
Actually most people seemed to have an extra, heavy, outer layer - like the one you wore at rest stops - and these all steamed away at lunch time in the cabins. Our Vapour Rise stuff wasn't even damp, and kept us beautifully warm over the silk vests and TNF long-sleeved t-shirts.
It funny how different people have different preferences - the only zips we need to control temperature are the ones on the front of our VRs.
I think some people carry far too much, especially when camping, with a warm sleeping bag available, but if in doubt...
Have fun in the snow.
Martin and Sue

Shuttleworth - you're right on the money with adjusting your kit before heading up hill and cooking yourself!

Martin - the primaloft top that would normal take isnt that dissimilar to the VR top. And you're right I was practically undressed compared to others on the trip.