A fresh dumping of snow on Thursday meant conditions were going to be 'challenging.' Thankfully this didn't apply to the north circular and M1 so a trouble free journey was had to our starting point.

A quick recce of the grounds of Grendon Hall failed to turn up any campers, and a flicker of 'perhaps it's been cancelled' entered my mind. The doubt soon disappeared when I put my head around the door of the Half Moon opposite and spotted Frank and a tiny group of others enjoying a beer in front of the fire. Their tents were way back around the rear of the hall apparently. After a swift drink it was back over the road to kick a hole in the snow large enough to pitch the tent.

Saturday morning clear and bright, and the conversations around the tents were on the night time temperature and revision of the proposed route as the going wasn't going to be easy. 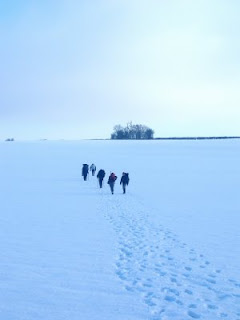 We zigzagged fields of snow following the tracks of those few that had going before us heading NE toward to Wollaston, then on to Irchester where a raid was made on the chippy and CO-OP. From there it was SE to Wyminton where the New Inn offered more refreshments, before we dropped further south to pick up the Three Shires Way, which we then followed to Yelden. 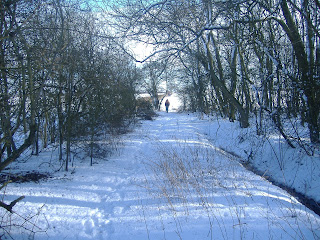 Saturday night's pitch was in the beer garden of the Chequers. There is probably an equation that succinctly sums up the results of having a number of backpackers camped in close proximity to pub but suffice to state my memory is a bit fussy over events of the night. I can however state that it was colder than the previous night, one of my tent pole joints shattered, my boots froze and the pub toilets that were meant to be left open for our use were locked. 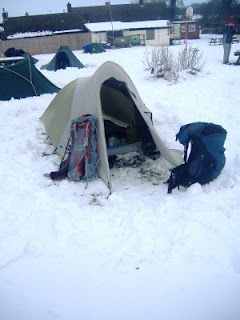 The return leg was, for Penny, Ant and I, a retracing of steps along the Three Shires Way to Santa Pod raceway and following field edge footpaths to Podington were lunch was had in a garden centre. And where the three of us caught up with the rest of the group. 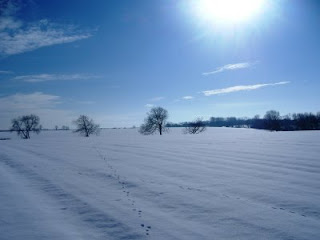 The Three Shires Way between Santa Pod and the A6 is along the infamous Forty Feet Lane; a horribly rutted usually muddy piece of bridleway, the condition of which was made much worse by ice covered puddles hidden under layers of snow. The use of poles on this stretch was invaluable but they still didn't prevent feet sliding into the murky depths of freezing water. From Podington we headed west as a group to Wollaston and then back to Grendon.

A challenging but enjoyable weekend of winter backpacking, with a winter wonderland back drop.

Great how the snow changed a walks dynamic. Good read that Baz and thanks.