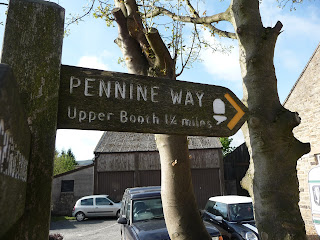 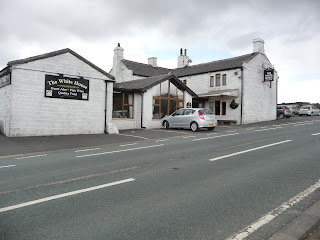 ...And ended here.
And this is what happened in between... On the first day as I was crossing Featherbed Moss my right foot found a hole in one of the causey stones, a hole! This brought me crashing down knees on the the stones. Luckily my right foot didn't get trapped in the hole so I was saved a possible fracture. Both my knees were bloodied and bruised, and I'd torn a hole in my brand new TNF Meridian Pants. The fall shook me up so I proceeded with caution, some of the slabs were cracked, sunken or had 'puddles' on them and I didn't want to get caught again.


My left wrist and shoulder had taken a jolt and were complaining too. It wasn't until I started descending Torside Clough that the trouble began, my left knee was struggling and was very painful, I was barely able to put it down without wincing. On the flat my knee cheered up and I was able to make Crowden but not without a spasm or two. And my shoulder was happy to be free of the pressure of the rucksack.


I didn't get a good nights sleep despite walking 16 miles, I couldn't sleep on my left side, the bruises on my knees didn't like contact with the ground, and neither did my left knee like being flexed over the end of my NeoAir (it's a 3/4 length).


In the morning I looked at the map and guide book and there wasn't a great deal of decent involved so I decided to continue. The day went well but I wasn't enjoying myself; it was very blustery but the sun was shining. I arrived at Standedge and found the pub that allowed camping, luckily I arrived there at the time the manager was unloading her car. Luckily because they aren't open Mondays. She allowed me to camp, gave me a glass of 'pop', a cup of milk and several litres of water. And I liberated a bottle of Merlot from the wine rack - I had to pay for this but all else was free. Trail magic is what American hikers would call that.

Needless to state but I was in better spirits and the Merlot did it's trick and a good nights sleep was had only interrupted by a few showers, of strange sounding rain on the fly. (I was later to find out that it was hail!)

Rested and feeling more confident, although with a fifteen mile day ahead of me, I set off and made good time. The morning started to unravel as I descended the slope to the footbridge over the M62, my left knee was up to it's old antics again. I'd been walking solidly for a couple of hours so thought a rest would help. Unfortunately not this time. Crossing Black Rocks a few miles south of the halfway point I was in a great deal of distress; wincing pain, spasms and inability to co-ordinate my feet. A repeat of the descent of Torside Clough, I thought I'd never get to the road. Time for a short break, and I snacked on a codeine/ibuprofen pain killer; no point in messing around with pissy other pain killers get the one that's as legally as close to cocaine as you can get.

At the White House PH I had a pint of orange and soda, and with the help of a young local lad I had formulated my escape plan. There was a bus due in fifteen minutes to Littleborough, where I caught the train to Manchester, from Manchester I had a uneventful coach journey home.

The doctor diagnosed a torn ligament, banned me from walking until I'm healed and has put me on a months worth of anti-inflammatory tablets.

Blimey, another name to add to the list of crocked walkers!

Really sorry to hear you had such problems - injuries can really blight walking, which seems so simple on the face of it!
Sounds like you had some decent-ish weather for it too with the sun making an appearance. Pants!
Good luck in your new job btw - at least something rosy in the near future for you :)

Wow Baz, I am so sorry to hear of your accident. It must be bitterly disappointing for you. get well soon and I hope those ligaments heal soon too

Every sympathy. My knee is also stopping me walking and now have an expensive day on Friday to see a private consultant - 7 month wait NHS!

Not good, but in my experience it somehow feels better to know that you really couldn't have made it; it's when there's doubt that quitting really hurts.

I read earlier post that you had a new job at TGO - congrats.

Sorry about that Baz. Heal fast and go do that trail.

Very sorry to hear of your downfall, a great disappointment after all that preparation.
I hope the doctor is right about 4 weeks, it sounds optimistic to me.

I was deeply disappointed and was metaphoically kicking myself, I couldn't do that literally as it would have hurt :)

There was a niggle of a doubt as to whether I was fit enough for it, clearly not with a crocked knee, but that aside I had confidence that I'd finish.

Having taken a three day chunk off the route, it's possible to complete it in two weeks but not with the open end approach that I had hope to do it under.

Sorry to read about your injury - hope you're feeling better soon!

Must be the painkillers! Sorry, I've just noticed the dates!

You're probably all better now!

Sorry to hear of your mis-adventures. Hope you have mended well and are busy planning your next trip :)

Just read about your accident which I can relate to having just fallen during a walk and torn a ligament in my knee. You can get all the detail from the blog page on my website http://happyhiker.co.uk

I am only just getting back to walking now. If I had been walking on my own, I would have had a real problem!