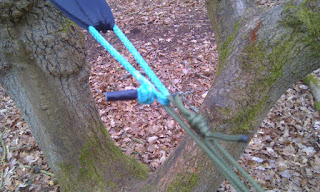 Hugger, soft shackle and paracord sling in use.
The thing I've discovered about hammock camping is that it's ideal for those that love to tinker. And for those that like to MYOG.

As I discovered finding trees of a suitable thickness and distance apart is an art itself. This is where tweaking the suspension system is a valuable thing to do. Using whoopie slings gives a greater range to where you can set up your hammock because they are highly adjustable. Swapping out karabiners for soft shackles saves weight, each shackle weighs a miserly 3.5g compared to 75g for your average locking krab and does the same job. Both the shackles and whoopie slings use the same principle, made from Amsteel a coreless cord, a loop is made by inserting one end of the cord into itself. Thus when loaded locks on to itself - genius! Unloaded and the sling can be slacked off or tightened up as required. Tree huggers, 1" tape slings with stitched loops, spread the load across the trees bark preventing damage, along with two paracord slings complete the system. I got my set up from DD Hammocks, as I did my hammock. 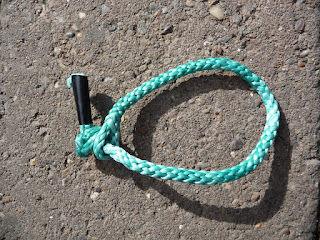 A soft shackle
What's not to like? Well the longer the whoopie sling the more stretch in the system, so if you've had to pitch the hammock between two trees that are a way apart you could find yourself closer to the ground than you may like, even if you place the tree huggers at chest height. Despite the silly weight of the shackles the combined weight of the system versus the tapes that were supplied with the hammock only saves a paltry 14g. Using paracord slings rather than tape means the ends of the hammock are bunched tighter making the ends narrower, giving a more constricted feel around my head. 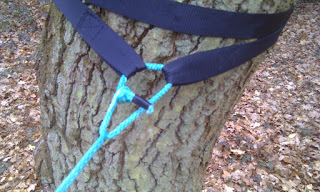 Hugger, shackle and whoopie sling in use.
It's difficult to pass judgement after only spending one night in a hammock so I intend to put in some more time in on a trip rather than in the controlled conditions of the backyard. But I did discover that getting into a sleeping bag with a short zip in a hammock isn't easy, so side opening one is a better option, or a quilt. Neither of which I own nor wish to purchase. I sleep on my side so I didn't feel quite as comfortable on my back. That said, I fell asleep watching the clouds scud across a star sprinkled sky, and awoke to early spring bird song.

Hammocks are really really nice places to rest after a long day’s walk. You need to get a sturdy one though if you do not want to end up on your butt on one of these jaunts. Nothing is less dignified that sitting on your behind accidentally.