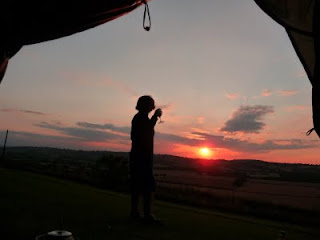 Wine but no sign of the author
Lower Hill Farm campsite is located a few miles south of Much Wenlock on the western side of Wenlock Edge. Rita, the owner, optimistically claimed that the site was terraced which it was, after a fashion. But that didn't matter to us as we had pretty much the whole campsite to ourselves so we found a relatively level spot in the top field with a superb view out across to Caer Caradoc, The Lawley and beyond. Behind us somewhere in amongst the trees ran the Shropshire and Jack Mytton Ways.

"What are we doing tomorrow?" Penny asked. "That," I said pointing at one of the hills.

In Much Wenlock we'd picked up an OS map of the area (1:25 explorer #217) and a second hand copy of Shropshire Hill Country by Vincent Waite, which happened to turn out to be a real find. First published in 1970 it covered all manner of legend, history, geology, architecture and more on the area. In fact this book became a reference to the walks we did, "So what does Vincent say about..." was often asked when looking at the map and the guide as we planned the following day's activity. Our imprint was the 1989 one and there are copies available online.

We used David Hunter's The Shropshire Hills, A Walker's Guide published by Cicerone that we bought from The Outdoor Depot in Church Stretton. Despite being close to the start of three of the routes in the book covering Wenlock Edge we opted to bag peaks instead. This was no slight to the charms that undoubtedly the Edge offered but I thought that I'd like to walk the length of it. And for that you need to use a two car shuttle.

As the day closed the route was decided, and we drank vino whilst reading Vincent.