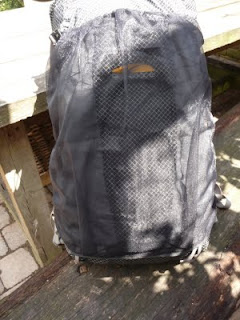 I spotted the detachable pocket on twitter last week. MountainGoat is a one person operation and as I'm a big fan of supporting the outdoor cottage industry, I ordered one up. They are made to measure so you have to supply the dimensions and specify what grade of grossgrain (the thin stuff is lighter) you want. The pocket was made, despatched and delivered within a week.

I have gone from an Osprey rucksack that had pockets a-plenty to the three pockets of the Golite Peak/Jam without missing the extra storage and gear organisation that you have with those additional pockets, so why would I want an add-on?

Fishing for gear in the main pocket of a Golite bag is like trying pick out the winning ticket in a tombola, although by adding a couple of mini karabiners stuff like keys can be easily got at as I described here. So having an optional mesh pocket seems to me like a good idea.

Thanks for posting this Baz, it looks interesting. I've been thinking about making something similar for my Jam but didn't realise someone made one! Cool!

If you order one give us a shout before you do and I'll email you.

I have a Go lite Jam and an outside pocket would be useful to store a wet tarp etc. I cannot see a price and no doubt this depends on the pack, but a ball park figure would help and shipping - I assume in USA?

Hi Bob, I think it came to 24USD incl shipping.