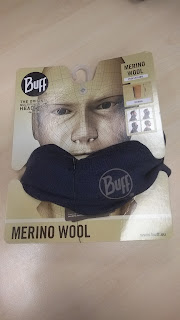 My merino wool buff is one of those bits of kit that finds its way into my rucksack on most occasions even in the warmer months.

It’s a versatile piece of kit that that has many uses; in winter I wear it as a neckerchief to seal the gap around my neck and mid layer, and in summer it becomes a beanie or nightcap to keep my head warm around camp or whilst sleeping. The bonus of using it as a nightcap is that I can pull it over my eyes as it’s getting lighter ensuring a few extra hours sleep after sun up.

I’m always pleased to get a kit upgrade and the guys at http://www.kitshack.com/ have sent me a thermal version of the merino buff to try out. Effectively it’s a heavier weight version of the original – 27% heavier – with a brushed finish and a much thicker and denser weave, and it tips the scales at 70g.

In the middle of August trying out a thermal buff might be a tall order, well at least I hope so, but I’ll be out bikepacking another section of the NCN 4 in early September so will tuck it in my spare clothing dry bag. I might not need it during the day but as a nightcap it will get some use.