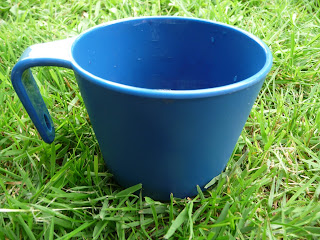 Most of my canteen set ups are based around the principle that you eat and drink out of the same receptacle – a pot like the Snow Peak 600 or the Alpkit Mytimug. Whilst this is a great way of saving weight and the double usage that all lightweight backpackers like to incorporate into their kit lists it does have it’s limitations. After all you have to eat your food first and then have your drink or vice versa, unless of course that drink comes in a hip flask or wine bottle in which case it’s just a quick neck in between mouthfuls.

On occasions I like the idea of having something handy for having a brew with the food, and swinging out of wine bottle, whilst effective, is a bit uncouth. And on other occasions, like when I use a cook system that doesn’t lend itself to the pot being used as a mug, such as with my Bush Buddy set up, a dedicated mug or cup is needed.

The classic was the plastic one pint plastic mug which is what the Snow Peak/Alpkit set ups base themselves around but that volume isn’t always needed as I’m not cooking with it just having a drink. And the GSI Cascadian cup at 450ml is ideal – big enough for a brew but small enough to be packable. The mug has graduations on the inside and the handle has a hole punched into it presumably for those that want to hang it off their backpack. I may take a saw to the handle as I’m not convinced I need it, and that would save some grams despite the weigh saving hole already drilled in it!  The cup is tapered but isn’t that tall so I’ve not noticed any stability issues with it. They come in a range of colours, and for the gram counters out there my one weighs in at 53g.