Just before Christmas there was a tongue in cheek discussion on a Facebook outdoor page about trail food. One poster was bemoaning the fact that nobody seemed to eat the classic rucksack staples such as pork pies, Garibaldi biscuits, scotch eggs, malt loaf, etc these days. I joined the discussion stating that Garibaldi biscuits were a favourite of mine because they were very durable but these days due to having to follow a gluten free diet they were off menu. As were the rest of the other items under discussion for that matter. 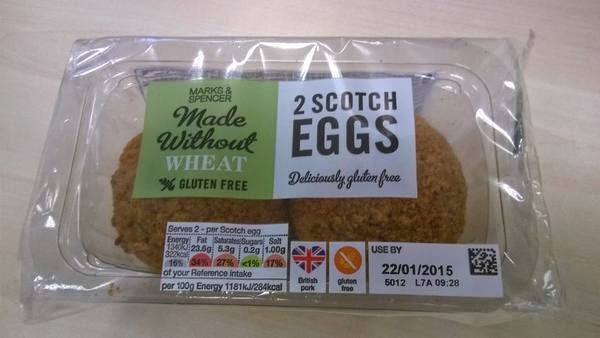 Not long after that I was looking for lunch in M&S and discovered that they now sell gluten free scotch eggs so they ended up in my basket in a flash. Back at the office they were gone before I could make note of the nutritional detail! And they were very tasty, a little drier than I'd like but that's gluten free food for you. A quick warm up would solve that but perfectly acceptable as a lunch when out and about. Since their discovery they have found their way in to my daypack on a number of occasions.

As you'd expect from a pork meat encrusted egg fat is high up on the count at 23g per egg (114g each approx) with protein at 13g and carbohydrate at 14g. As you can see with the amount of fat (20%) in it the scotch egg doesn't fit in today's ideal diet but if I'm out and about on the hills in winter these 'fat bombs.' are ideal for bolstering calorie intake, and are far more tastier than some alternatives.