I bought these at the beginning of the year but due to a run on stock they arrived too late for me to give them a try. So they’ve languished in the loft - until now. 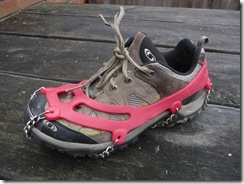 The snow was long coming to the cosy corner of Surrey/London suburb that I live in but come it did. However the conditions haven’t been the best to give these a try out. At the tail end of last week the skies cleared and the temperature plummeted as the sun went down, turning the consolidated snow to hard icy lumps. Just what I needed to give them a go.

The MicroSpikes are easy to put on. Put the toe of your shoe in the front end and placing this on the ground and then pull the heel end back, and up over the heel. I was able to do this with one or two fingers with a gloved hand. 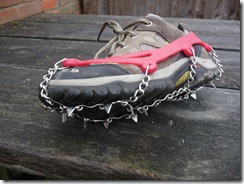 A tasty array of spikes

They’ve got ‘front’ on the toe end which is pretty superfluous as you cant read it but it’s easy to distinguish the front from the heel end. For a start there’s a spacer wire bar at the toe end which holds the chains and spikes apart at the that end. The heel end is wider with only two holes. Incidentally, I used the toe bar as a way of hanging them off my rucksack with a mini crab when not in use. (And off the back of the living room door to dry when I got home).

They can be popped off just as easily, just run the finger under from round the outside edge.

In use they gave a reassuring crunch and bite as I would’ve expected over frozen turf and snow as well as hard frozen consolidated snow. It was a bit disconcerting walking direct on non covered path as the spikes obviously shifted as I walked whereas crampon points don’t. In fact I started to notice different levels of ‘travel’ depending on the type of surface I walked over. Unfortunately the icy conditions didn’t last and by Saturday morning the thaw had put paid to any further testing.

But most importantly, do they come in any other colour? :)