the thames path - home to windsor 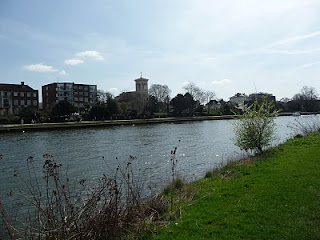 Seething Wells
This was meant to be our last section hike of the North Downs Way between Otford and Rochester. However an early panic and flapping session involving a set of missing car keys (and not for the first time this week I might add!) meant a swift change of plan.

Liam and Tina headed to ours for an amble along the Thames westward towards Windsor. I'm not sure how far I can get with boasting about living less than 500m from a National Trail, if I lived in Edale or Twice Brewed it would be another matter. That may be but the route offers a wide breadth of changing scenery from the City landscape of London to the rolling hills of the Cotswolds. Oh and it's flat, mostly.

The trip was intended to introduce Tina to the backpacking experience. An oversight on my part scrabbling to approximate the distance meant Saturday's mileage was a little understated; 14 miles and not the 10 miles that I'd figured. The Thames wiggles, twists and turns a fair amount. And as the trail has to depart the river in places it makes counting grid squares to estimate the distance pointless. 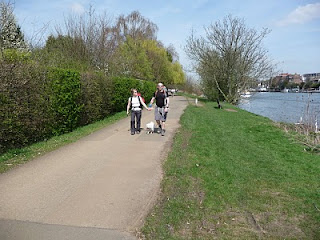 Tina, Charlie and Liam
What amazed me was the diversity of buildings along this stretch of the river. It's a real mish- mash; prefabs, cottages, mansion houses, bungalows, and the odd palace. And the condition of these buildings were as varied; collapsed, ramshackled and pristine in unequal measure. There are several eyots along this stretch too, some reached by footbridge others seemingly by the use of oars or outboard motor.

We stopped at a river side pub near Sunbury Lock for refreshments, non alcoholic in case anyone was wondering. I redeemed myself in his eyes later by jogging into Shepperton to pick up a bottle of merlot to wash supper down. This foresight was swiftly banished when on the way into the campsite at Laleham we passed a garage that sold booze that would have saved me carrying the bottle and it's contents those last few miles. And much to Tina's delight I whipped out a mini can of rum and coke for her to celebrate her days effort. (There might have been a touch of guilt for buggering up the first days mileage in that process). 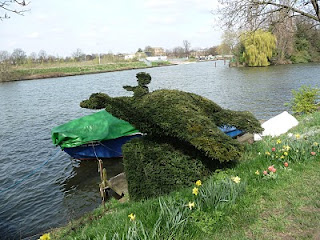 I got a good night's sleep and only woke once due to falling off to sleep without putting my beanie on. I woke early to the sound of birdsong; blackbirds, song thrush, robin and chiffchaff, were joined by tits, and a solitary woodpecker. I love camping at this time of year; spring birdsong as an alarm clock is a real pleasure to wake up to.

The mileage for the second day was much shorter which was a relief for the foot weary. My knee was fine but my overlapping toes were a bit sore. The weather wasn't as good, overcast and windier than the previous. The Montane windshirts that Penny and I had proving yet again that they are worth their minuscule weight and pack size.

On approaching Staines we were surprised how up market the place was, no sign of the Staines Massive. And I can state that I didn't see, one, let alone a group of hoodies. However heading out the other side and you get a different picture, the south bank of the river is heavily industrialised. And from the condition of some of the units not particularly successful businesses occupied them either. We swiftly left the crumbling industrial units behind, and the valley opened up as we entered Runnymede. Past Old Windsor and Ham Island where there's a short bit of canal that's been cut to take the sting out of the loop around the island. Just before Albert Bridge we spotted two red kites wheeling and hovering in the wind.

At Datchet we made an executive decision to grab the train from there rather than struggle with the crowds that we'd meet in Windsor itself. It goes without stating that what took a day and half to walk was covered by a 25 minute train journey.

There is always something good to look forward to. One day you go walking and you'll discover some good places out there. It was nice reading your post and the adventures in it. It's just like I've been there also.