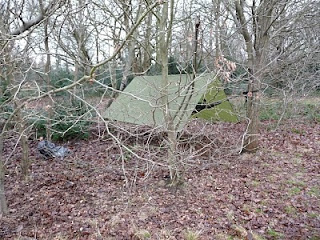 I’ll start by stating that I don’t think that a hammock has much use in backpacking in this country. So why purchase a hammock?

It’s a fun piece of kit that may have it’s uses. The DD Travel Hammock, bought from backpackinglight.co.uk, is unique in that the base material is waterproof so if you find yourself without the necessary trees to hang between then it can be pitched like a tent. This is what caught my eye, I have a tarp and a couple of other single skin shelters that might require something more than a groundsheet. The base is double layered which allows you to slot in a Therm-a-rest or a CCF mat.

The stated weight was 900g but on the scales it clocked 1184g making way too heavy as bug proof inner for the Golite Hut2. The hammock came with a stuff sack and some black bungee to tie up the netting. I also bought a skin as this makes it easy to set up and pack up. And it will keep the hammock dry and clean too. 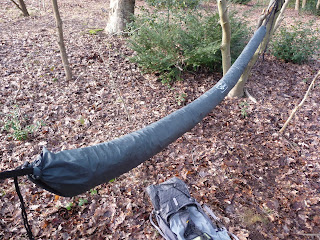 There are a couple of useful videos on YouTube, and the manufacturers website has all the information needed on how to hang the hammock. Basically find a couple of sturdy trees about 12 feet apart. The trees need to be living and be free of any dead branches that may drop off and cause injury. This is not as easy as it may first seem. My first trip out had me scouring Ham Common Woods. Most trees were too close together and those that I found that were far enough apart were snared with brambles, or the trunks were too fat for me to pass my arms around. 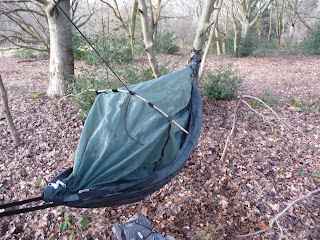 A pair of trees found and I tied the tapes around the trunks at chest height and carefully sat on the hammock to test the security of my knot tying. Success! I then guyed out the netting. Luckily the trees I picked had handy branches in the right spot to enable me to do this with relative ease. I found and threaded a stick through to open out the canopy above my head, slotted a mat in and clambered in. Hammocks are comfortable to lay on, so I don’t think a Therm-a-rest is necessary. What you will need is some insulation however so a CCF mat like the Multimat Adventure Long would be an ideal choice. I guess a three quarter length mat would do for the summer saving weight and bulk but I wonder whether the mat being shorter would migrate out of place.

If you don’t need to use the canopy you can hang the hammock upside down. Incidentally the canopy has two full length double zips either side, allowing ease of access and venting options if needed. Internally there are two pockets, on opposite sides and at shoulder level. And these are big enough to hold a head torch, wallet, cereal bar that sort of thing. There are tabs on the under side of the canopy so a drying line or other bits of kit can be hung up.

To make the set up weatherproof a tarp needs to be pitched as a roof over the hammock, like an A frame but higher up the tree. 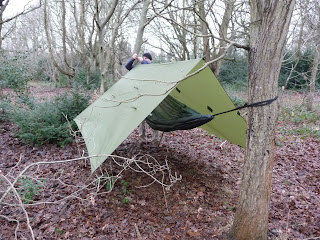 The combined weight of hammock, tarp, skin, tapes, guys and pegs puts the set up close to 2kg, which makes it too heavy in my opinion for a backpacking shelter. The hammock with the tapes is a bulky package too. That said I might take it out on an overnighter where a pitch amongst the trees could be found, and where the weight isn’t too much of an issue.

It will get used, we’ve already sketched plans of how the rear garden is going to look, and in those plans is something to hang the hammock between. Hopefully in time for some summer time slumming.

Interesting, I looked at the DD hammocks myself as my mate has a Hennessey, never got round to getting one for the reasons you mention (suitable pitches/weight) but for a bit of a change of scene it look great.

I'll be watching with interest to see how things progress.

I love using hammocks when I go camping. They're light and portable. And I live in MS where there are lots of trees.

Great to use for stealth camping and....also pitched high up you can sit underneath (if the tarp is erected) and cook your food in the dry...I also would imagine it's good keeping you off a damp ground

I slept in a hammock in the Brazilian jungle and it was an awesome experience. It was a rented one. I don't think I'd buy one but def fun to sleep in one when traveling!

I agree that the DD hammock solution is a little to heavy to be considered for the light weight category.

That said, I use DD hammock during the summer when I know rain is not an issue (so save on the tarp). It really comes into its own when pitch space is small or on a hill.

If you want to go a step further check out these guys....