“There doesn’t seem to be much of a distance between the two campsites,” Ramblin’ Jay enquired of the BPC new members meet. Which was true but what she didn’t know was this area of Wiltshire is studded with tumuli and other ancient remains that are connected by a network of paths, tracks and trails. Enough to make up several weekends walking in fact.

The weather on the run up to the weekend was poor and I ditched the idea of packing the Bush Buddy as I doubted that I'd find any fuel dry enough to use. Although I did pack the tarp as I’d found a set up that would give the best weather protection from a rectangle of green nylon and a couple of trekking poles. 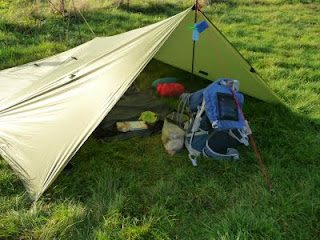 Friday night's pitch was a very sheltered spot and I pitched the tarp facing a wall but I didn’t need the extra coverage. We sat out side watching the stars slowly disappear behind the encroaching cloud until we felt spots of rain that had us diving for cover. The rain was short lived and the cloud passed leaving a clear sky with tumbling temperatures and rivers of condensation running down the tarp. Not that it mattered I was comfortably cocooned in my sleeping/bivi bag combo.

Saturday got off to a leisurely start despite the pre sunrise up farmyard cacophony of cockerels. Introductions and greetings were exchanged over breakfast and coffee. And several ideas for routes were proposed and debated. Two loose groups set off in differing directions with these breaking down into smaller groups as the morning progressed. 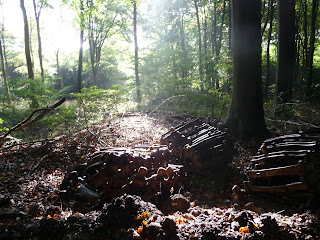 On the Wansdyke Path, West Woods

Ramblin’ Jay, Mark, Steve and I splintered from the group we started out with and headed on to pick up the ridge that ran from east to west along the northern edge of the vale. We loped over rolling down land in bright but breezy sunshine, stopping for a break in a small depression on the side of the chalk escarpment. I used the break to eat a home made gluten free pork pie and to flick the remaining moisture off my tarp and into the breeze. 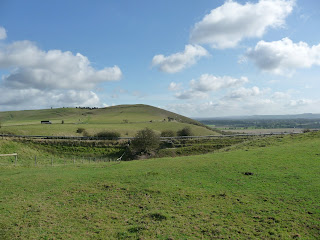 The southern edge of the Marlborough Downs

At Adam's Grave on the Pewsey Downs Nature Reserve we headed south to Honey Street on the Kennet and Avon canal and in doing so the white horse on the hill side revealed itself as we retreated to the pub. 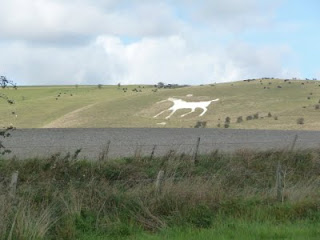 One of the many white horses

At the pub Mark and I discovered that a book we both owned had had a big influence us when we were much younger and was instrumental in getting me backpacking. The book was Derrick Booth’s The Backpackers Handbook. Even more bizarre was the fact that Mark, a fellow blogger, had written about the book and Derrick had contacted him. Here’s Mark’s post on the subject.

From the pub it was a easy ramble along the towpath to Wilcot. The sun was beaming and in the shelter of the vale it was hot enough to strip off the legs and walk in shorts to the campsite. Unlike the previous nights site this was more open and I was a bit concerned about my kit being on view under the tarp. Due to the prevailing wind the open end was facing across the site to the road which didn’t help. I cooked and chatted to others as they floated by and had a snooze before heading to the pub.

The following morning started grey and threatened rain. Ramblin’ Jay and I opted to take what was meant to be the most direct route back to the car. Along the canal, over a bridge and along the White Horse Trail north. 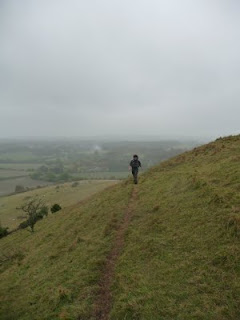 Ramblin 'Jay on the way

Everything was going to plan including the increasing dampness of the day until we headed up on another ridge near Oare and somehow we managed to drift slightly off route going further to the east than we needed to. We handrailed a fence and then a forest enclosure heading north, with the rain and clag reducing visibility and adding to the challenge. All way marking and signs of any footpath vanished so we dropped down across a meadow and located a path running along the edge of another enclosure. At the junction of this path and a track there was a OS map planning application that indicated that we had found our way back to the White Horse Trail and highlighted the dog leg diversion that we’d managed to take in doing so.

Before leaving Wilcot David Topley (the weekend’s organiser) had mentioned that the final leg of the route back to our starting point was through a field of maize that was head high and difficult to pass through. When we arrived at the field and we took one look and didn’t even bother. We circumnavigated the field, which in itself wasn’t without problems as we had several barbed wire fences to get over/under.

An enjoyable weekend where I made some new acquaintances, caught up with some old ones, and tried out some kit.

Great Baz, you got out and about and a BPC to boot. How did you like the tarp in late autumn and is it something you would take into a winter scenario?

I saw you looking enviously at those tents! Come on, admit it, you'd prefer a proper canvass really.

And didn't RJ decide to invent a new sport of white horse bagging. I've been to two more since, so I'm on three. Ho hum.

Dave, For winter I'd give it a go if it was clear, dry and bright. But then it would be chilly and I might prefer something a bit more cosier.

yeah, me too Baz!

What kind of poles are you using with the tarp? I have got some Black Diamond ones but they are a quite heavy. Thanks Ben

Ben, I was using Mountain King Trail Blaze poles bought from Bob at BPL UK. They are fixed length, I think 110cm. They weigh 120g each.