mapledurham and the thames path

Took a drive up to Reading on Saturday before last to meet up with Jay. The Thames valley and the Chiltern Hills on the north bank of the river are her regular stomping grounds so Penny, Harry and I, were treated to a guided tour.

With one of Jay’s dogs, Cassie, a whuppet we set off towards Suleham Woods and from the valley side there were good views north to the Chilterns and up the valley to the Goring gap, where the villages of Goring and Streatley sit on opposite sides of the river.

On entering the woods we startled a deer, no white rump marks so it could have been a muntjack. The deer more agile than the dogs soon vanished.

Across a few fields we passed through Purley on Thames heading towards the river. After the second world war a row of holiday bungalow cottages were built on the flood plain on stilts and a few still survive today in various states however the plots of land where the bungalows once stood now are home to a variety of new build houses. For some reason a few of the older new builds didn’t take on board the essential design feature of stilts and suffered a number floodings that meant they had to be replaced this time with raised ground floors and entrances. 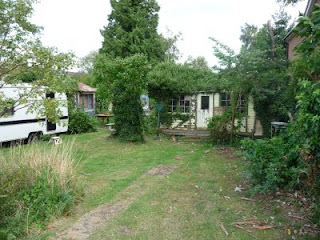 We picked up the Thames Path and headed towards Mapledurham Lock. As soon as the river bank dropped low enough Harry and Cassie wasted no time and went for a dip. Approaching the lock Mapledurham House appeared through the trees, unfortunately you can’t cross the river here so we backtracked along the Thames Path to Pangbourne and crossed the river via the toll bridge to Whitchurch on Thames. From here we followed a track that ran parallel to the Thames towards Hardwicke House and Mapledurham village. Just outside Whitchurch we stopped for a break and brew. I’d packed my Bush Buddy (bush baby, as Jay christened it) and after gathering a few sticks and twigs we had fire going and a pan of water on for a boil much to Jay’s amusement. 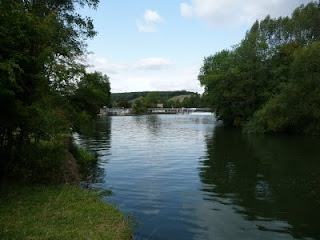 This was the first time we’d been out for a walk with Jay and we chatted about food, gear, the places we’d walked, and canoeing. This last topic is currently a hot one for me and I was pleased to find out that her and her husband, Robert, owned a kayak and a three person Canadian – it was a bit obvious as they were hanging from the roof of the carport! 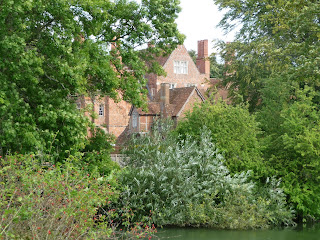 The hedgerow along the path to Mapledurham village was heavy with blackberries, sloes, and dotted hereabouts a few Mirabelle plum trees full of ripe golden fruit. We helped ourselves to mouthfuls of fruit as we walked along. As it was getting late we cut the walk short and Jay arranged for Robert to pick us up from Pangbourne. 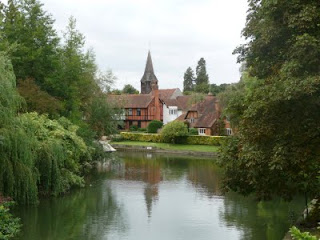 Jay later informed me that we’d covered 13 miles that afternoon, a bit of a surprise but when the conversation is flowing, the company easy going and the ground underfoot sound it comes as no surprise.

Looks like we’ll be meeting up again in early October on a Backpackers Club trip in the Vale of Pewsey, she may even convince her daughter to join us. Either way I’m looking forward to our next trip.