The best ideas are simple ones. The plan was to take the train to Winchester and start down the the South Downs Way. The Hampshire end has few campsites and, as it is mostly farmland, the opportunities for a discreet wild camp are few and far between. And despite the farming, water is also hard to find. And those cattle troughs I did spot were guarded better than the gold in Fort Knox. 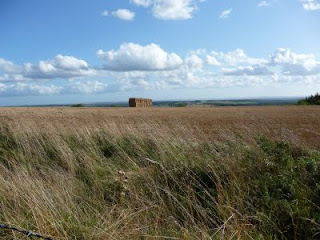 Nevertheless we were undeterred by this. The section between Winchester and Exton was reminiscent of the first leg of the North Downs Way; flat, sometimes slightly rolling farmland. And the path like other sections is mostly bridleway which made for easy walking. Despite a late start we made good progress and found ourselves in Exton at six just as the pub was opening. We grabbed the now obligatory orange juice and soda, peanuts and crisps and asked about camping. We were in luck, there was a farm nearby that did camping. We grabbed a bottle of wine and headed off to the site. In retrospect we should have taken up the offer to be picked up as the site was about a mile and a half off route and much of that was along a busy B road. Arriving at the farm the site owner explained that the official site was being dug up, but we could pitch our tent in the walled garden where the swimming pool was! 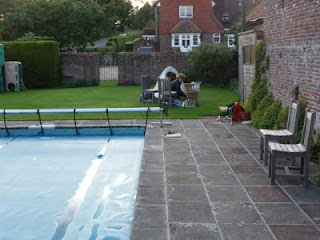 The grass was short and the site level which was a surprise however it was next to the road. The tent was soon up and we made use of the pool side furniture to cook and eat our evening meal. Dark looming cloud and spots of rain had us clearing up and retreating into the tent as night fell. The Wasabi is a great little tent and we were able to pass the time happily finishing off the wine and listening to the rain patter harmlessly on the fly.

The day dawned bright and cool. The sun failed to reach our enclosure and as the rain overnight gave way to clear skies the tent was damp with rain and condensation. After an early breakfast we broke camp and headed back to Exton and picked up the South Downs Way. Despite a good nights sleep - I played the joker and used ear plugs that muffled the traffic on the road - I found it hard going. Initially it was over similar terrain but as the route began to roll higher and higher I found it harder going with no power in my legs. I was also suffering from an excitable tummy. We stopped for a extended break at the top of Old Winchester Hill, an Iron Age Fort. 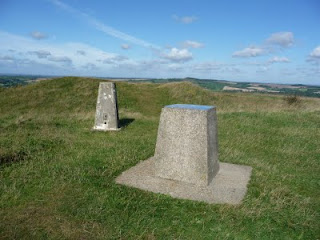 And it's easy to see why they made this very obvious spot a fort; it has commanding views in all directions. We could easily make out the Isle of Wight. With the sun shining and a good breeze blowing across the top we dried and aired the tent and our sleeping bags; good backpacking housekeeping. I even inflated my NeoAir and took a ten minute snooze in the (vain) hope that it might help. Progress was slow; various detours and switch backs seemed to hinder our advance along this section. We stopped at the Sustainability Centre for a drink and a now frequent visit to the loo for me. Some more road walking lead to the familiar downland ridge walking that the Way is known for. Dropping down from the ridge the route crosses the A3 at gap in the ridge.

At the information centre we grabbed more refreshments and made use of the facilities. Enquiries were made at the desk about camping nearby but we'd past the one farm about a mile and a half back, and off route that were happy to allow backpackers to camp. I wasn't happy about backtracking even less so when we were told that the facilities were minimal and only open when the farm was. Or there was a bus back to Petersfield in less than half an hour from where we could get a train back to Guildford. It was really no choice and we grabbed the bus and was home in little under an hour.

On reflection having a gyppy tummy isn't pleasant, on a trail even less so. Importantly there is the issue of dehydration and, the fact that what you do eat you don't get the full benefit from, will effect your performance even over easy ground.

what was the name of the farm

Looking at the OS map of the area the place is called Corhampton Lane farm.