The day had dawned sunny, and with the cloud clearing over night, the sky was bright blue. The clear sky and lack of breeze meant that the inside of the Hut2 was heavy with condensation so I was glad I’d added bivi bags to the gear roster. The Hut2 is roomy enough for two plus gear but there’s always a chance that a sleeping bag could brush the side, especially at the foot.

Over breakfast we discussed whether to continue with the East Devon Way or adopt the South West Coast Path as both lead to our planned finishing point. The coast path won out as another couple of days of micro navigation and electric fence tangling didn’t really appeal (Penny had got zapped yesterday so it was an easy won argument). 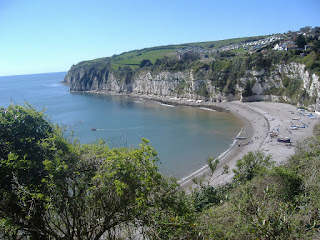 The first climb of the day out of Seaton and over to Beer was an easy one; a gentle introduction to coastal path walking. From Beer the path climbs slowly and steadily first to Arratt’s Hill and then on to Beer Head. Just past the headland the path drops to follow a narrow, twisting and in places ‘entertaining’ route through Under Hooken down to Branscombe. For added entertainment try this bit when the ground is damp! 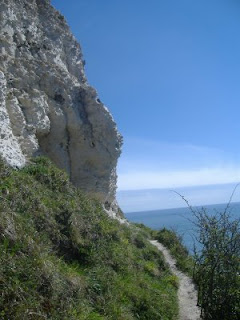 Do try this in the rain

We stopped for refreshments at the Sea Shanty in Branscombe and a chance to spread out the Hut2 for the sun to burn off any remaining damp.

The climb out of Branscombe is steep and unremitting. Once out of the combe the path continues to climb until dropping steeply down to beach level at Weston Mouth. Again another steep climb up and at Lincombe the path (thankfully) follows the contour around the hanging valley. Not so for the next one and the again the path drops down almost to the bottom of the combe before heading a little way inland to a footbridge. At the footbridge we had a quick chat about options and decided to head inland to Salcombe Regis and the campsite there. 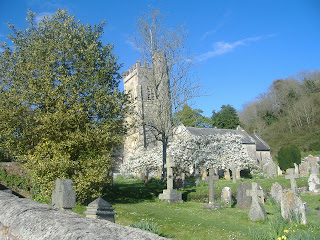 ‘The campsite for discerning campers’ didn’t meet our (not quite) discerning needs. A quick round of the camp shop failed to produce any overpriced wine or beer. And the shelves were also empty of Heinz baked beans and pork sausages, cream of tomato soup and other camp shop staples. They did however have milk. They also gave us the most sloping pitch on the site despite other flatter ones being freely available (so we took one of those instead). 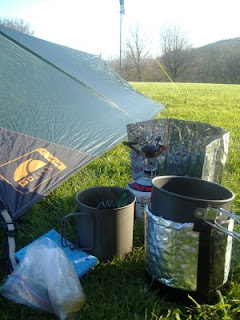 As I was preparing supper, a chap walked by the tent with his little boy. The boy asked why a walking pole that was holding the rear of the tent up. His father replied that it was a ‘clever’ tent because it used walking poles as tent poles so that you don’t need to carry those as well. Clearly a well informed camper.

The decision to take the coast path was a good one but it soon became clear earlier that day that it was by no means an easy task with the amount of ascent and descent that’s required. Good practice for the Picos in July without a doubt.

Did you do this section on Monday? If so I must have passed you going the other way! Haven't got around to writing mine up yet by the way...

This bit we walked on Saturday. We didnt see many 'proper'walkers and only two likely looking backpackers over the three days.

So you did this bit on Saturday, while I was walking from Exmouth to Sidmouth. I completed this section in the opposite direction on Monday!