The Golite Peak has been my go-to pack for day and weekend trips since I bought it late last year from backpackinglight.co.uk At forty litres it handles most loads for spring and summer backpacking but packing it became an art form. And over the summer I had to forego its use on a longer trip because I was unable to fit the food I had to carry into it. 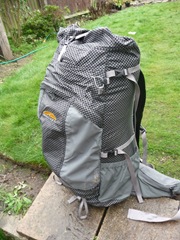 Buying a Jam was therefore a logical solution to the problem, again bought from backpackinglight.co.uk. As I’ve already stated the Peak is a mini-me version of the Jam, so they share most of the same features that I highlighted here. The main differences between the two is that the Jam’s hip belt isn’t removable, and obviously, the capacity is larger; stated 51l for the long back length. I had to match it’s baby brother so I got it in Black and Grease (gray) obviously :)

I think that the capacity is likely to be too big for my purposes because on the times I was unable to use the Peak I used an Osprey Talon 44. And the size of that seemed about right. Unfortunately the pack size is the pack size but it does have compression straps to take up slack. And similar can be achieved to some degree with the roll top. There’s always a danger with spare space; the tendency to try and fill it with superfluous kit.

As a post script to the above. I used the bag on my last trip out. And as expected it was a comfortable carry; I had 5kg of base weight, 1.5l of water and 1.5kg of food.  My worry about it’s capacity seems to be right, I do feel that it’s bigger than I need, at least for shorter trips. Now if Golite was to produce a midi-me Jam at 45l I’d be happy to shell out some more of my hard earned cash.

Baz, I have heard a lot of good reports on this pack. I have the Pinnacle for winter trips and the OMM Jirishanca for the summer. Certainly it would be on my list if I had not bought the Jirishanca, which can be tight at 35 litres.
Mark

I've an old Berghaus 64zero that Ive used for overnighters in the summer and as you state 35 litres is a bit tight. Although having less space is a good way of making sure you only pack what you need!

I gave my old Jam away. Shoulder straps not so good on that model. The new one is rather good. My mate has one and I covet it. I got a Gorilla pack and will be sticking with it. But if I had seen the new Jam in the flesh sooner it would have been on my last walk instead of the Gorilla pack I expect. I do like the Pinnacle a lot but it is very large at 70L and unless you are hauling five days food and lots bulky kit the Jam is perfect for UK lightweight backpack. I don't rate the Peak as a multi day pack. It is my day pack of choice and very good for me as that.

I've used a 2009 Jam all year (including TGO) and its been excellent but I too think its a bit big for most trips I go on these days. The top is always really lose when rolled due to so much extra space. I bought an OMM Classic 32L (yet to be used) as my 3 season pack just as the winter started to approach, when I think the Jam is a better choice and the extra space for warmer sleeping bag, Crampons, etc is welcome.

I bought the Jam in GO Outdoors early in February for the bargain price of £35. I actually prefer the 2009 model to 2010. My dad has the newer one and it went up in weight by 100g with extra padding.

The peak is bit big for me on a day walk and have been using the Terra Nova Laser 20L for the last 3 months.

I used the Jam again at the weekend, and didnt need to think about how to pack it due to the capacity.

I think the extra 100g in padding and hip belt design is worth the comfort they give.

And still a lot lighter than the Exos and Talon that I had been using.