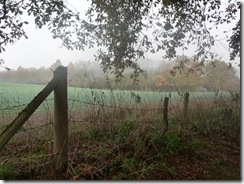 Still some colour on the the trees

Saturday morning started with a lot of talk about gear. I had packed the Scarp1, and was kept busy answering a string of questions about the tent. This didn’t matter too much because the day’s mileage wasn’t going to be excessive, and we were expecting a few more to turn up. I also had a chance to chat with Grant about his Big Agnes bivi bag and Terra Nova tarp combo. The wind had given his set up a battering and we chatted about the ways that tarps can be pitched to withstand the elements. In this case the tarp wasn’t big enough to be pitched in my favoured bad weather configuration – the cave or pyramid. Not that it was crucial, as the Big Agnes he was using gave full protection to him and his kit.

It became clear that once we started to break camp, that black and grease Golite rucksacks were the most popular by far. In fact there were only two rucksacks that weren’t, out of a group of about twenty people. 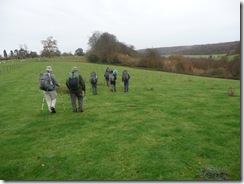 The Walk for Wildlife weekend is unique. The Warburg Nature Reserve allows the BPC to stay (exclusive to the club) and each attendee makes a donation towards the reserve. Better yet Anne has a sponsor who matches pound for pound what she raises.

And it was towards Warburg we walked. The previous week’s windy weather had stripped much of the leaves from the beech trees that the Chilterns are known for but there was still a burnished colour to the hills. The Chilterns are also known for Red Kites that were re-introduced very successfully here about twenty or so years ago. We hadn’t left the campsite when one of these most graceful creatures circled above our heads.

The route was a pleasant ramble through woodland and up and down hill, with the occasional trot along a valley. And there were plenty of Kites to see along the way.

Arriving late afternoon we found spots to pitch our tents between the trees. With foresight I could have packed my tarp and hammock instead of the Scarp1, next time for them then.

The quiet magic of the Reserve was shattered by the solitary chatter of someone’s radio, so I pointed out that we were on a nature reserve and myself and others wanted to enjoy the dusk as nature intended. With the radio off I cooked supper listening to robins, and then the owls as the light faded.

The nearest pub was two miles away but as I was feeling fit the four mile round trip didn’t deter. Besides what else was I going to do with the rest of the evening? So a bunch of us set off on mass, and returned a couple of hours later. After having convinced the locals that we weren’t mad for camping out at this time of year; it was for charity see.

The night passed with a sweeping soundtrack of foxes, owls, pheasants and other creatures calling out. At one point I had a dream that I was struggling to hang my food from a tree in a bear bag whilst the wildlife circled my tent.

I’d learnt that the train service that I came up on was being replaced with buses. So being close to Henley on Thames I checked whether the service via Twyford to Reading, and back to Richmond from there was running. I was in luck, so Sunday morning I bailed out along the Oxfordshire Way to Henley; a stroke of luck. As I headed along the way I got offered my second lift of the weekend, so thanks to Roger I was able to catch the first train out of Henley. And I got back to Richmond before lunch.