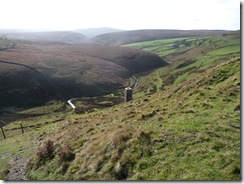 This has been an annual trip of mine for the last few years. The drive up to Buxton took longer than it should have done, due to several sets of road works, but we still managed to get there before dark, which was what we were aiming to do.

With spectacular timing the rain started to lash down as I stepped out of the car, driven by gusts of high wind. The campsite was already sodden so I squished about looking for a level and least damp spot on which to pitch the tent.

With the tent up I started to blow up my NeoAir, back from the car with her rucksack Penny asked whether I’d packed her Thermarest… Back into the car she drove into Buxton to arrive five minutes after Jo Royle’s had shut. Time to improvise. Wasting no time she raided the local supermarket and grabbed half a dozen corrugated cardboard boxes.

Back at the campsite I made another uncomfortable discovery whilst kneeling in the tent the groundsheet started to seep. Not good.

The tent was taking a hammering from the wind which had changed direction in the twenty minutes since I pitched it. So out I got and repositioned it, reset the guys to the rear of the tent, used my trekking poles as extra pegs, and dug my tent peg toilet trowel in as another anchor for good measure.

The rest of the evening passed without further incident. Apart from the minor fact that my Petzl e*lite was putting out as much light as a burnt out tea light. I was reluctant to use the spares in case I needed them for my blood monitoring machine.

The missing mat meant a change of plan for the morning so along with Geoff, who’s encyclopaedic knowledge of the local bus routes saved the weekend, we walked into Buxton and went to the gear shop to buy a CFC mat. I tried to convince Penny that she needed a NeoAir but given she can get a good night’s sleep on cardboard the expense didn’t seem worth it.

With a mat and batteries bought we had enough time to enjoy a proper coffee before catching the bus to the Cat and Fiddle. This turned out to be a better way of starting the walk as we missed the bitty circumnavigation of Buxton, stepping off the bus straight on to a good path to Three Shire’s Heads. 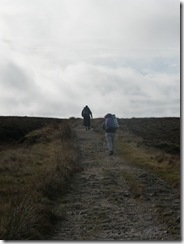 The path to Three Shire’s Heads

The weather was dry but drafty however we soon lost the breeze once we descended into the Dane valley proper. We arrived at Three Shire’s Heads in time for lunch, and in time to meet Christine Roche who had planned to find us there. This is a great picnic spot and, due to the good weather, was the busiest I’ve ever seen it. As Christine was only about for the afternoon she accompanied part of the way until having to return by another route back to her car. She was then going to meet us at the Roaches Tea Room, everyone who knows her will know of her love of tea and cake! Gradbach Youth Hostel was closed denying us a chance for an early breather so we pressed on, taking a more direct route thus missing out Lud’s Church. 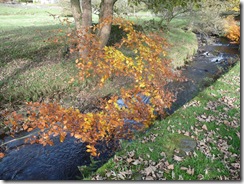 At  Roach End Geoff knee had started to give him grief so he opted to take the road to the tea house, whereas Penny and I climbed up to the Roaches Skyline. We followed the gritstone edge along before finally dropping behind Hen Cloud before finding the road, and ultimately the tea shop where we found Geoff and Christine tucking into tea and cake – obviously!

We pitched our tents with setting sun lighting up the evening sky. And I popped down to the Rock Inn for something stronger than tea to wash supper down with.

The Sunday dawned cold and claggy. Geoff’s knee had seized up and he wasn’t up to returning to Buxton on foot. Fortunately his local bus timetable knowledge saved the weekend for the second time. So Penny and I escorted him down to the bus stop to ensure he got back to our starting point without incident.

I have very fond memories of this area having lived near Glossop myself some years ago. Sounds like you had a good trip and were mostly lucky with the weather!

I seem to fairly lucky weather dodging. Managed the same last weekend too :)