chilterns, walk for wildlife part one 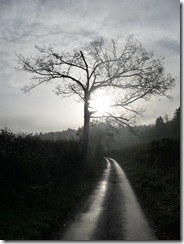 “Jane has sent me an email about a trip to the Chilterns, shall we go?” I asked. “I can’t I’ve got 100 hours of reading to do… for this essay I’ve got to get in before Christmas. Why don’t you go on your own if you want to..”

Kit compiled. and I’m in the kitchen sorting food, needed a few more cereal bars but otherwise I was ready to stroll.

I’ve had lunch and I said my goodbyes, and was on my way to Marylebone to catch the 14.23 to Saunderton in the Chilterns.

Arrive Marylebone… the next train was at 15.23 so I took a train to High Wycombe having been told that there was a bus to Radnage from there.

Found bus station in High Wycombe and discovered that bus goes at 17.40. I returned to the rail station to catch the train to Saunderton, that was due in at 16.07.

I set off from the station and headed across fields to find the village. The weather had closed in and a drenching drizzle accompanied me all the way. Low cloud meant that it was getting dark earlier than it was meant to, so the head torch I’d dug out of my bag whilst on the train was put on. Despite the weather and the lack of light my navigation was spot on. Until, that was, I reached the end of a single track road and spotted a sign post that stated, Radnage 1/2 mile. I checked the map and the road did seem to lead to the village. After about twenty minutes there was no sign of the village, and the map didn’t seem to match what I could make out as I went along; buildings and road junctions that shouldn’t have been there. Whilst re-checking the map a white van pulled up along side and the driver asked whether I was looking for the Crown. This took me aback but I said, “yes”. “Ah,” he said,”Are you meeting some people there?” Again on the back foot, I told him I was as it was a club trip. He told me I was heading in the wrong direction and that the sign post at the single track had been twisted to point in the wrong way! He offered, and I took a lift from him. On the way to the pub he explained he’d had a chat with those in the pub and having been told that others were on the way he put two and two together when he saw me. American backpackers would call that trail magic I guess. Anyway I was due a break having just missed the train earlier.

In the Crown I caught up with Anne and Chris, had a drink and met some club members that I’d not met before. It also gave me the opportunity to dry out and wait for the rain to stop before heading to the camp site to pitch my tent and have supper.

I was back in the pub, obviously…