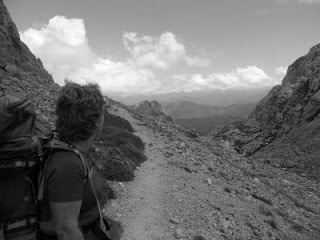 The only time on the trip we set the alarm so we wouldn't miss the bus. Having scouted the bus stop and time the evening before we strolled confidentially through Potes picking up breakfast - a piece of tortilla and a cafe con leche - on route to the supermercado handily sited opposite the terminus. Despite all the advance planning we missed the bus. Penny was convinced that it went through earlier without stopping however I wasn't so sure, what she thought was the bus was going in the wrong direction.

With only two buses a day we weren't keen to hang around until late afternoon, so we strolled back down the main drag to the taxi rank and employed the services of Jose Angel and his glass roofed Merc, which he took great pleasure in rolling back so that we could see the mountains. Despite speaking no English we picked up that that he didn't like the mountains because he suffered from vertigo. And when I saw the cable car in Fuente De I had to agree with him!

Outside the cafe we sorted our gear and filled the platys from the near by spring. A rough plan had been formulated the evening before and we were going to climb up to Tomos de Liordes crossing Vega de Liordes and find a bivi spot the other side of Sedo de la Padiema most likely near Llagu Bajero for water as there appeared to be a few flatish spots close to the lake.

We wasted no time getting stuck into the ascent a steep zig zag up to a pass in the mountains, the Trail Blaze poles eased the climb. At the pass the path levelled out and we entered a wide alpine meadow ringed with sharp pointy limestone peaks. There were still traces of snow at the top of the pass and on the higher peaks. Mid way along the meadow we stopped to eat a late lunch and to top up our water supply from a spring - the sun had been beating down relentlessly and I'd already drunk the two litres that I left the town with. From the meadow we followed a faint track westwards weaving in and around boulders, patches of snow, and on one occasion a small herd of cows protected by a very large, loud dog.

Early evening we stopped, there was no sign of the lake that we were going to bivi next two, so I whipped out the Geko and switched it on and got a map reference. Ah! I said, If I'm not mistaken the lake is over that ridge! Climbing up we passed a flat tussocky spot that was to become our bivi site for the night. Edging over the ridge the lake came into view, I dumped my rucksack got out the platys and descended to the lake side. There wasn't any where flat to be had that side of the ridge and that was fine with me. The meadow was studded with boulders that looked like they'd fallen from the massive head wall on the north side of the lake so there was some risk hunkering down there. 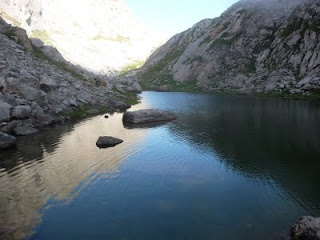 With our mats out we ate supper watched by curious but nervous Iberian chamois, as the sun set the limestone peaks around caught the last rays turning a pinkish tinge. The air temperature dropped as the sun lost it's fight with the horizon and we settled into our bivibag clad sleeping bags, and we soon drifted off to sleep as the stars began to appear in the sky. 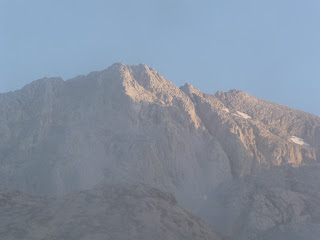 We woke to glorious sunshine and after a brew and breakfast we descended a scree covered gully zig zagging our way down carefully to Vega de Asotin, a high alpine meadow filled valley at 4,000ft. 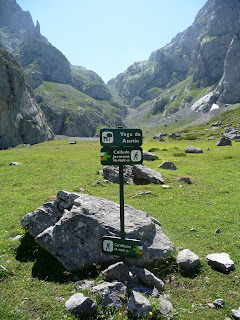 Crossing the valley we began a torturous descent involving a good number of grade one scramble moves - a highly entertaining finish to our mountain crossing and giving a surprising added value to our chosen route. Although Penny had a lot of climbing experience under her climbing harness she hadn't had much of scrambling with a rucksack on. There were a few expletives and complaints of having short legs but otherwise she descended in decent style. And more importantly without mishap. For me I enjoyed the switch in focus from putting one foot in front of the other to using my limbs in co-ordination. At Cordinanes we headed down the road next to the Rio Cares to Posada de Valdeon where we spent the night.

Looks and sounds like a great trip. The bivy sounds perfect under the stars.

That last picture. I can almost feel the cold rock and coolness of the shade after the blazing sun.