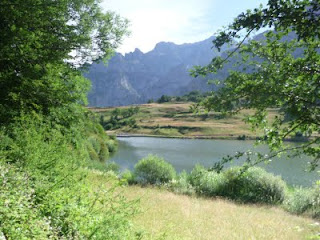 The day didn’t go entirely to plan (there seems to be a theme developing here!) The guide book mentioned that there was a bus service running through to Cain at the start of the Cares Gorge. Having wandered around the village the evening before we were unable to find the bus stop and as the park information service office was shut we had no option but to pop back first thing in the morning.

The very helpful Park Warden rang the bus company for us and was told that the bus needed booking twenty four hours in advance. Not very useful. Kindly she asked whether it was at all possible for them to run the bus but the driver had taken his family (presumably in the bus) for a day trip to Bilbao.

We briefly thought about catching a cab but I swiftly dismissed the idea by exclaiming that we were on a walking holiday after all! It happened that after checking the map, and having another chat with warden, there was a path called the Camino de Bustio that ran along the west bank of the Rio Cares all the way to Cain.

The path was well signed, good underfoot and mostly in shade which was good because the day had dawned bright and sunny. The verges were busy with butterflies and an abundance of wild flowers. Grasshoppers jumped on to the path and back out again and common lizards scurried away as we crunched down the path. 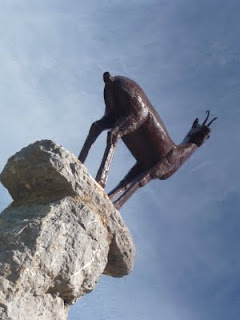 After a few kilometres we arrived at the Mirador del Tombo across the river from Cordinanes; we craned our necks up across the valley and traced the faint line of our descent route from yesterday afternoon. From here it looked incredibly steep and made the North Ridge of Tryfan look remarkably easy angled. From the Mirador the path wanders along between the road and the river until finally you have no choice but to use the road. Just off the road is the Chorco de los Lobos near to a couple of settlements that was used by the valleys farmers to catch wolves, presumably to eradicate them. Whilst on the road to Cain we were passed by a bus (no doubt following it's ill informed Sat Nav).

At Cain we stopped for a cafe con leche and the now obligatory piece of tortilla before heading off down the gorge. The first kilometre or so of the path is carved out of the rock, and it also happened to be the busiest. Partly due to to those walking it’s full length are getting into their stride, the narrowness of the walkway along this point but mostly due to the day trippers that walk in huge groups 500m up the gorge from their coaches, take a few snaps and then walk back, again in huge groups. 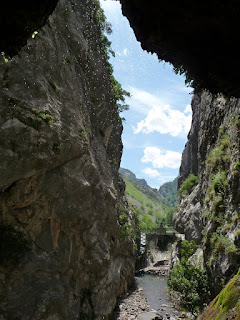 The gorge is seven miles long and as you head north it opens up, drops in altitude until it starts climbing up to it’s highest point before dropping steeply down into Poncebos. The path was easy going with places to stop to admire the views and as we progressed we were accompanied by the occasional rumble of thunder and shower. None of this was a hassle as there were places to stop and stand out of the short downpours. 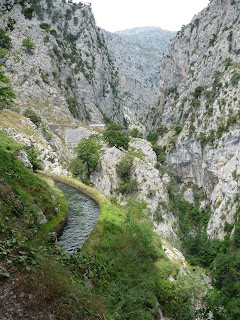 We put waterproofs on once but overheated in no time, so we just waited the showers out. It hadn’t taken me long to realise that the ideal piece of kit for this weather was an umbrella. On the last haul up to Los Collaus the skies opened and we were soaked in minutes. 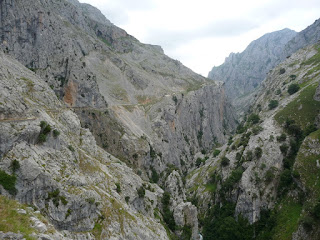 What timing! There we were crossing the highest, pointiest bit of the gorge at what was probably it’s widest point, naturally I was very worried about a lightning strike, we wasted no time scurrying down to Poncebos. 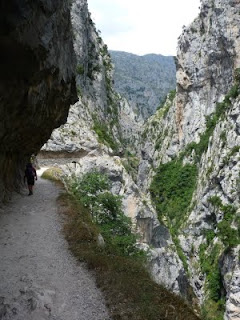 Despite the drenching it had been an enjoyable day with about thirteen or so miles covered with over 500m or so of ascent/descent thrown in. So we celebrated with some cheap local wine and an ensalade ‘Poncebos’ (something of a road accident) and a plate of Patatas Bravas (chips with chili sauce). 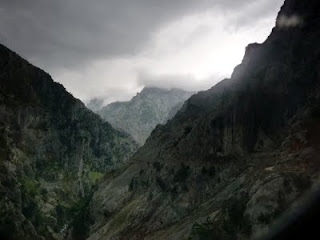 Great photos and writing, Baz! Its refreshing to see Spain and hear about the sunny weather and cheap local wine + tortilla. I'm looking forward to the next installments, also because I am planning to walk the Camino de Santiago, possibly next year.

There's a treat in store for you from the end of the trip :)

I'm curious awaiting it then =)