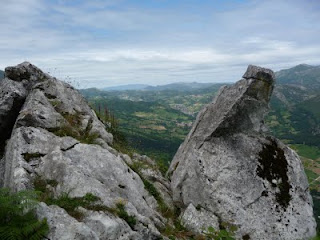 Although I enjoyed the day off I was keen to get back into the mountains. From the tourist information kiosk we’d picked up some bumf about local way marked routes and walks. The one that caught our eye was a route that followed a Roman Road over the mountains to Tielve which was on the road to Sotres.

From the edge of Arenas de Cabrales the route climbs steadily up switching back and forth to take the sting out of what was 1350m of ascent. We were hailed by a local taking a breather under a tree, he asked where we were heading and we replied, Sotres. We gathered from his reply that he was very impressed at what we were attemping because the route was long and arduous.

Unlike the routes that we’d followed on previous days although this was a way marked path there was a complete lack of them once we’d passed through a gate where the irrigation channel that runs through the Cares Gorge from the damn at Cain that cuts across the mountainside. Due to this and a number of confusing forks in the path we headed further east than we should have done and found ourselves in a high alpine meadow full of cows, goats, horses and deserted farm buildings. We followed the path across the meadow watching Griffon vultures circling on thermals, and when approaching the other side realised why. 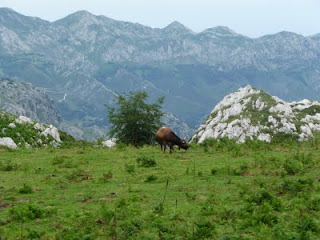 There was a steep drop off the meadow. Back tracking across meadow we spotted a silhouette of a walker on the ridge in front of us, then another… We wasted no time heading for that point and found that we had rediscovered the route that we were meant to be following (this section actually had way marks). The route continued to follow this ridge climbing steeply to a meadow, then up to another hump of a summit, then another meadow and so on. 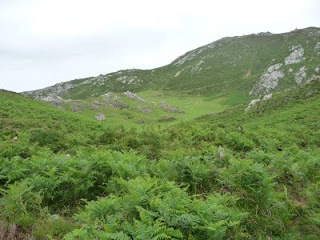 In the last meadow the path veered sharply up over a saddle and ahead of us we could see the gorge that we were going to follow tomorrow back to our starting point. We started our descent to Tielve. Originally we were going to head there, hit the road and follow that into Sotres. I’m no fan of road walking and as we were in some of the most spectacular countryside it seemed a bit silly not to make the most of it. There were several paths marked on the map so we continued journey on those. This last part was particularly hard – it had been overcast most of the day and being up high there was a faint breeze but down in the valley the sun came out determined to make up for lost time, and in the shelter of the valley the breeze was no where to be felt. We were also tired; we’d done huge amount of ascent and descent and had covered at least 13 miles by that time. We were hungry too, I fumbled my last jelly baby as my hands were shaking from a hypo. A strawberry jam portion found it’s way out of my bag and onto my tongue, just enough to get me into the village. 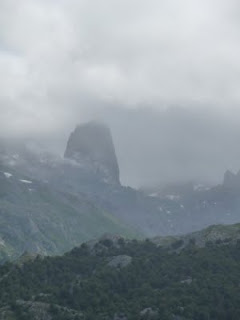 We booked into Hostal Perdiz, had a saunter around the few shops picked up some more supplies, especially a couple bars of chocolate, one of which I part demolished. Back at the Hostal we took one look at the menu and were sitting at a table without hesitation; rice salad, followed by egg, chorizo and chips and a rice pudding. All the carbohydrate we could possibly want for us to sink our teeth into! After the meal we took ourselves up to our room and after shower it was lights out.

Email ThisBlogThis!Share to TwitterShare to FacebookShare to Pinterest
Labels: picos

Baz, it looks like a fab area. Thanks for the report.