The geology had changed during the course of yesterdays walk; the polished limestone protuberances that made the first half the day tough going for the feet gave way to much softer red sandstone and the cliffs changed accordingly; striking vertical strata were to dominate until we reached the limestone that re-emerges at St Govan's Head. 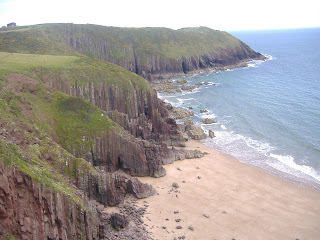 Making good time we followed the coast path dropping gently down into Freshwater East, the sun had been shinning strongly all morning so the chance to grab some shade and a cold drink was welcomed. Climbing out of the resort (and rightly so; I don’t think I saw one building that wasn’t a holiday let) we stopped for lunch on Trewent Point. The prevailing weather revealed in the wind shaped trees. 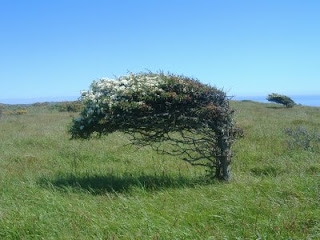 The path was more overgrown along this section and wound slowly up and down the gentle contour of the coastline until we arrived at Stackpole Quay where we stopped for tea and ice cream. I remembered this place from my first visit to Pembroke six years ago when I stayed at St Petrox. a tiny settlement in land from Bosterston. From the quay we crossed Barafundle Bay and looped around Stackpole head to reach Broad Haven. Here I left my rucksack with Penny and jogged along the side of Bosterston Ponds to the village on a mission to seek out wine, milk and postcard. The service in St Govan’s Inn was how I remembered it; one person serving one hundred customers. I abandoned the jogging for a more careful stroll on the return journey with my precious cargo of rose wine and postcard. Back at the mouth of the ponds I re-joined Penny, stowed the wine, shouldered my pack and we picked our way across the dunes to Trevallen and what was to be the cheapest nights camping of the trip.