Penny spent a lot of her early childhood camping over the summer at Trevayn Farm on Monkstone Point and was keen to share the beaches and coast line that she’d spent so much time building sand castles and walking on. I’d only ever been to Pembroke twice in my life, and both these time was within the last six years, so a plan was hatched

We were going to head to Saundersfoot and walk along the south Pembrokeshire coast and see how far we got.

Day one - Saundersfoot to Manorbier

Compared to the section of the South West Coast Path we walked over Easter this was by far a less strenuous affair. And unlike the Devon coast this is more remote with smaller settlements with, in most cases, no or little facilities. Disaster struck as we stopped in Tenby to use the loos, the fly on my TNF meridian zip off trousers failed. Penny made a swift, albeit temporary, repair that lasted until we got to camp. A couple of safety pins did the trick for the rest of the trip. 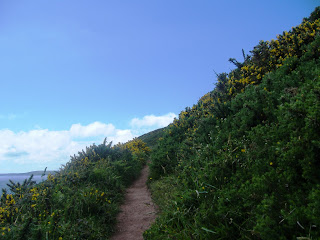 We followed a well defined path over undulating cliff top covered in an abundance of wild flowers into Manorbier. The resort, which is really the wrong word because there’s no pier or parade of slot machine shops or burger and ice cream vans, is dominated by the castle on one side and the church on the other. We stopped at the pub for a pint of orange and soda, and that classic post walking/climbing combo of salted peanuts and crisps. At the local store we picked up some necessary supplies (milk and wine) and directions to the nearest campsite. 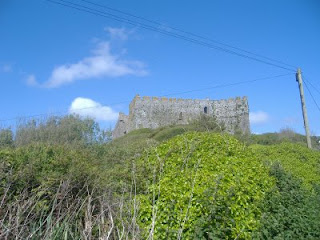 It’s inevitable that coast path walking will mean staying on commercial sites. The plus side is that they’ll have showers and washing up facilities, perhaps a shop with basic items on sale (not a given; grab what you can before you get there). The downside is that you’ll end up camping on the bit where it’s too rough and sloping to make it suitable for caravans next to a extended family intent on drinking a small lake of lager whilst doing an aurally half decent impersonation of a fairground on a Saturday night. And pay full whack for the privilege because they don’t give concessions to minimal carbon footprint makers like backpackers. Earplugs, a good days walk, and half a bottle of wine when combined are a suitable antidote to the above.