The day dawned bright and sunny but the high pressure that had given us the cold spell was moving off to the continent and blustery, warmer weather was moving in from the west.

The ground that had remained frozen this last week had began to thaw and as the temperature rose the ground got softer. May be not the best time to be heading out on a circuit through woodland and fields that sit on top of the clay vales at the foot of the Chiltern escarpment then. 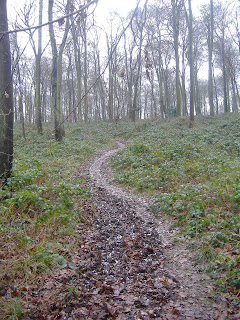 The Ridgeway long distance path runs along the base of the Chilterns at this point and I remembered how difficult the going was when I walked it a few years back, especially after it had been churned up by four by fours. Thankfully we were on footpaths and the ground was, by comparison, relatively easy going. I did begin to appreciate where the phrase 'feet of clay' seemed to come from by the end of the day. 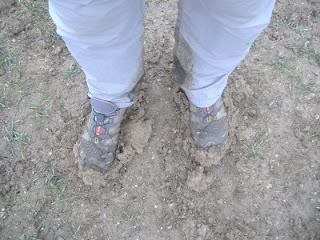 The blustery wind helped the aerial displays of red kites that were successfully re-introduced to the area in the 1990's. Gracefully gliding on gusts of wind they were relatively easy to capture on a compact digital camera but in doing so I burnt out a set of rechargeable batteries in the process. 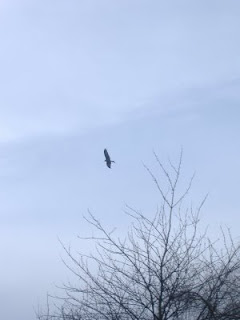 The guidebook hinted that we might see greater spotted and green woodpeckers in the woodland but on this occasion it was not to be. However we were content with watching the aerial antics of the red kites above the fields as we crossed them. 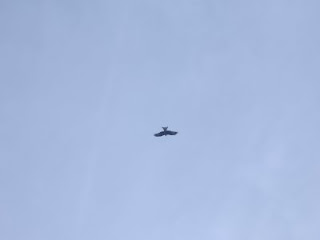 We have Red Kites breeding near to our house, it's very impressive watching 3 of them circle a field, working as a team! They also came and watched the Falconry display put on at or village fair last year, I think the Falconers were slightly nervous!!

Good to hear from you shuttleworth! I can only agree with you - we spend a fair amount of time just standing there wtaching them wheel around the sky - and I was snapping away like crazy trying to capture their displays.

We were driving down a local road and scared a rabbit through the hedge to safety, a split second later a Kite dived down to the spot the rabbit would have exited the hedge, out of the frying pan into the fire for the rabbit I fear!

I assumed that all the gliding across fields they did was hunting for food but I've not seen any dive to catch anything so far.

I don't know if it actually caught anything, but it did look bad news for the rabbit!

I thought they were mainly scavengers, though I've never seen them eating in the road like Crows and Magpies. There are plenty of rabbits and pheasants round here, and they do like to try and cross the road!

I like watching the very tight circles they can fly in, if you are below them you can see the tail working very hard to control it all. Hopefully they'll keep breeding, they make an impressive addition to the countryside.

I've read that they scavenge, and they tend to be happy wheeling above fields as they do above the roof tops of Chiltern villages and towns.

This unfortunate ease with human habitation and oppportunity it presented to scavenge meals meant they were easy targets for 19th Century hunters, who shot them out of the skies to extinction.

The breeding program has been a success in the south east and other areas are undergoing the same re-introduction, with similar success.