Something I scribed but never published until now.

A lucky collision of work schedule and the need to use up a few days annual leave before the end of the month found me planning a trip for early November. But where to go? My various guidebooks and trawls of the internet didn’t inspire, so I posted the question in the forum on the Outdoorsmagic website. A handful of ideas were offered and one grabbed my attention – take the train to the Lakes, and make up your own route. I pulled the OS maps from the book case and a route plan was born.

I stepped off the train at Windermere at lunchtime into clear, bright, sunny weather with a fresh northerly wind. I headed north east out of town towards what was to be a wild pitch at the end of Troutbeck Park. The cunning part of the plan was to stop here and leave the steep climb up to High Street until the following day. I soon learnt that flat in this area usually meant boggy too. So I had to make do with a small but sloping site next to a stream – handy for water but not conductive to sleep, I’m glad I’d packed ear plugs. 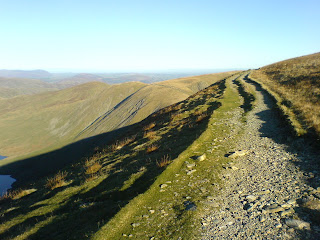 The following day dawned bright and sunny, and the northerly wind had picked up making it watery eye fresh. As I headed up the steep path the view back to Windermere opened up, and when I finally reached the summit of High St (828m) the Lake District’s distinctive landscape revealed itself to me. I was sure I could see as far as the Irish Sea if not further to Ireland itself it was that clear. I was on the course of a Roman road and I wondered about what the soldiers from the Roman Empire’s warmer climes would have made of the weather if not the mountains.

I had an early lunch at High Raise (802m) and retraced my steps to the Knott (739m) and followed a path that ultimately leads down to Patterdale via Angle Tarn. I stopped at the tarn for a rest, a brew and a paddle. I pitched my tent at Side Farm in Patterdale on what was the coldest night of the trip.

I woke early and the tent was frozen inside and out, and my platy had a Slush Puppy like filling. From Patterdale I picked up the path that runs along Grisedale and up to the tarn. This is a steady climb but the path runs on the south side of the valley so I was in shade until the path cuts across just below the Outward Bound hut. 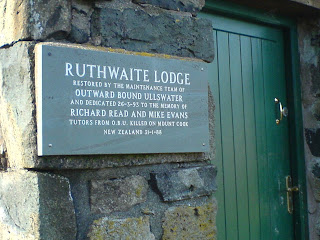 I was glad to finally feel the suns warming rays after spending much of the route in the frozen shade. On reaching the tarn I unpacked my still frozen tent and put it out to dry. I put on a brew and ate lunch but declined to have a paddle and took a snooze instead. From the Tarn the path leads up to Grisdale Hause once there I opted for a scramble up to Fairfield (873m) which may have not been the best idea as the path was very steep and made of scree. Two legs bad; two legs and both arms good in this case. Once on top the weather started to deteriorate – in true Lake District fashion. I picked my way south along this summit ridge picking off the summits of Hart (822m) and Dove (792m) Crags before descending a scree slope and crossing a boulder field into Rydal Fell.

It was now late afternoon and finding a level, dry spot here was a challenge in its own right. I made it halfway down the fell before I managed to find a pitch, by then it was dark. I wasted no time getting the tent up as the temperature had dropped steeply and due the surrounding marsh like valley floor it was not only cold but damp cold. Interestingly enough by the time food was cooked and eaten the air temperature had gone up to 5c which was warmer than it had been the evening before. After supper I lounged in my sleeping bag with the tent door open and watched the almost full moon peer around the clouds that scudded across the night sky. I celebrated the moment, and my last night in the Lakes, with a dram or two of whiskey. 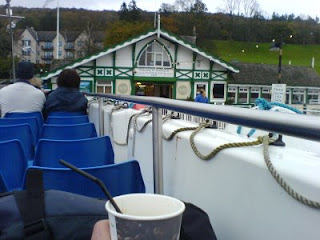 The settled weather that I had enjoyed on the early part of this trip had gone; the back of the fell, and the summits that I had walked over the afternoon before, were hidden in cloud. It didn’t matter; this was my last morning and I’d be heading back to London that afternoon. In less than two hours I was in Ambleside and made my way to the quay for the final part of the trip – a 35 minute boat trip down the Lake to Bowness. Spots of rain chased some of the less hardy tourists below decks from the open topped boat but I was buoyed (!) up with a winter warmer (a coffee and cream with a dash of whiskey) bought from the café on the pier.
This was the first time I’d backpacked in the Lakes. It’s also the first time that I bagged summits as a backpacker too. The Lakes are easy to reach by train from London with the outbound journey time of 3 hours 20 minutes making it better than going by car. However the homeward journey was 2 hours longer due extensive engineering works that always seem to plague the rail network in this country at weekends.

Might be worth a browse through my site before you head out next time for some ideas?

(Just checked & sods law - that trip was done the month before I started up the blog, perhaps a trip to post this winter when things get quiet?

Lakes - fells and boat rides make good trips. Glad you putting photos to your blog now as it adds so much more to a story

John - thanks for the wild camp tip. I've been scourng map for some where to pitch near Grasmere.

Martin - I did have some issues with putting pictures in some of my postings (apart from most of them being on someone else's camera. Bilberry pictures from last Sunday being a case in point!) I did struggle a bit with the ones I added to my Lakes posting.