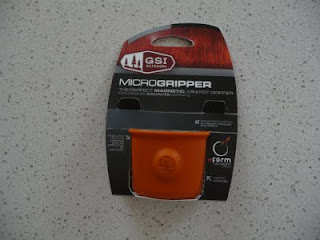 I've coveted these since GSI launched it's Minimalist cookset a couple of years back. And as I already own more pots and pans than I can use I wasn't about to splash out thirty odd quid for a small piece of orange silicon.

That said I have two cooking systems that would benefit from this piece of kit; an AGG three cup pan and coke can stove, and the Primus 1l pot that I use with my Bush Buddy. So luck was with me when I was doing a trawl of the gear shops on High St Ken at the weekend, as I stumbled upon the grippers being sold individually in Ellis Brigham. 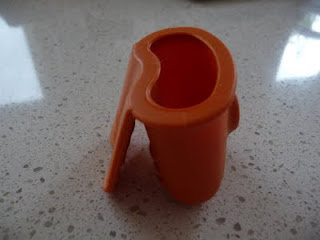 The gripper weighs 12g which is less than half the weight of the MSR litelifter that it replaces. It also features a magnet which is useful with a gas fueled system as you can park it on the cylinder so it's at hand when cooking. The other use is for storage; you can park it in the concave bottom of a cartridge. Since both the systems I intend to use it with don't feature a steel cartridge I'm considering whether to cut the magnet out to save a few more grams.